I know what you’re thinking guys, but hear me out. It sounded too adorable to NOT read and I promise to hold off on all other Christmas related things until at least Thanksgiving.

With that out of the way, let’s get this tour review started! 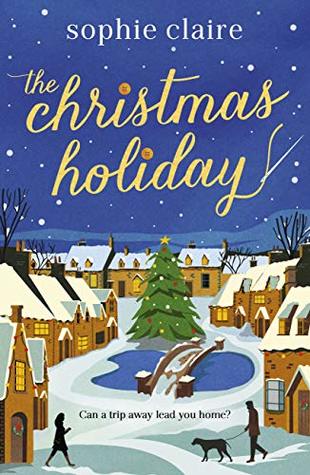 A charming Christmas story, with a European twist, of how love can surface in the unlikeliest of places. From an exciting new voice in festive fiction.

Can a trip away lead you home?

After a bad break-up, eternal optimist Evie Miller has moved to the small village of Willowbrook to finally pursue her dream of opening a craft shop. Unfortunately, with money worries and an ex- boyfriend determined to track her down, her fresh start isn’t going entirely to plan.

Jake Hartwood is also looking to escape his past. Haunted by the loss of his wife, he’s determined not to get close to anyone again – and the last thing he wants is to be celebrating this December.

Hoping to avoid the festivities, Evie and Jake arrange to escape Christmas together as friends in Provence. But can they avoid the magic of the season from changing things between them?

And what happens if one of them starts to feel something more?

If you think this sounds like an adorable Christmas read that’s perfect to get you festive and ready to watch the rota of Hallmark Christmas movies…you would be right. This is a cute romcom read that has everything you would expect from such a book. There’s Christmas, there’s love, dogs, a brooding handsome man, and a wonderfully quirky and adorable owner of a village shop.

Clair delivers on what you’d want if this is your sort of genre. For me, I find myself always enjoying festive and adorable reads, so, in my mind, it perfectly delivered on this and did not disappoint. It’s a sweet read that makes me anticipate the whole month of December.

There’s also learning to deal with loss, self-esteem issues, and did I mention the dog? I think Clair did a wonderful job forming this cosy world that you want to get lost in while drinking a cup of hot chocolate.

So, I give this three and a half cups of hot chocolate with extra marshmallows.

If you’re already on the hunt for festive reads, make sure you add this one to your list!

Sophie Claire, born to a French mother and Scottish father, grew up in Manchester where she still lives with her husband and two sons. She writes stories centred around sunny Provence, where she spent her summers as a child.

Four years ago Eliza Dacey was brutally murdered.
Within hours, her killer was caught.
Wasn’t he?

A skilled producer, Jack knows that the bigger the conspiracy, the higher the ratings. Curtis Wade, convicted of Eliza’s murder on circumstantial evidence and victim of a biased police force, is the perfect subject. Millions of viewers agree.

Just before the finale, Jack uncovers a minor detail that may prove Curtis guilty after all. Convinced it will ruin his show, Jack disposes of the evidence and delivers the finale unedited: proposing Curtis is innocent.

But when Curtis is released, and a new victim is found bearing horrifying similarities to the original murder, Jack realizes that he may have helped a guilty man out of jail. And, as the only one who knows the real evidence of the case, he is the only one who can send him back…

Jack Quick had a podcast and then he was given a chance to turn that into a true-crime tv documentary and he decided to reveal the injustices of the justice system. Police bias, shoddy investigating and circumstantial evidence led to Curtis Wade being convicted of murdering Eliza Dacey.

This equates to Curtis Wade being innocent…doesn’t it?

Jack Quick is certainly a different sort of MC, I really was impressed that Stevenson gave us a male MC with bulimia, something we so often forget can affect everyone. Another thing that was well written was the fact that there was no magic cure for it, that it stays with him and is something he constantly struggles with. Too easily do we write away difficult things with a wave of a ‘wand’ but Stevenson doesn’t do this and so I respect that.

Another thing about Jack Quick is that he makes decision after decision and he never knows how it will play out, this leads to many consequences (for better or worse you decide) and that’s something I always feel is important, especially in a thriller.

The book is divided into sections and to divide them, it’s set up like a TV episode script and that was actually a lot of fun to read, I found myself really happy to get to a new section just to read those bits alone.

There’s a lot going on in this book, just when you think you’ve figured it out, or rather Jack has it figured out, you’re left with more questions and more explanations. Now this was something that as we got toward the end that I wasn’t sure worked in its favour, but I tell you what, I did enjoy the ending tremendously.

I think that how it ended was extremely fitting and I applaud Stevenson for leaving it that way.

Obviously I’m not going to put spoilers so you’ll have to read to find out what I mean.

The crime takes place in a small town where everything is dependent on wine, wineries, and vineyards, one person’s in particular and because of this we get to see how that can be a bad thing but we also do see some redeemable characters as well and I think the absolute best part of all of this was the angle of the true-crime documentary.

This is a huge reminder that TV is still just that, TV. Interviews, evidence, towns, they can all be edited to appear how someone wants you to view it. Jack seems to forget that he has, whether he truly meant to or not, manipulated an audience into seeing things the way he wants them to and this is part of the consequences I was talking about, because what happens when he wants to try and attempt to dig for the real truth? Would anyone believe him, and how could he convince those who were convinced by him before that he may have been wrong?

A great thriller, perfect for this summer set in Australia in some ‘wine country’ and giving us twists and turns to no ends. Three and a half cups of coffee from this caffeinated reader!

**I want to thank Hodder & Stoughton for a chance to be on this blog tour and for a proof copy, which in exchange for, I have given my honest review.**

Benjamin Stevenson is an award-winning stand-up comedian and author. He has sold out shows from the Melbourne International Comedy Festival all the way to the Edinburgh Fringe Festival. Off-stage, Benjamin has worked for publishing houses and literary agencies in Australia and the USA. He currently works with some of the world’s best-loved authors at Curtis Brown Australia.

The Rest of the Tour Schedule