I know this book came out on the 18th, but I was having a ‘oops’ moment and had thought it came out the 28th, so that’s why this is late. 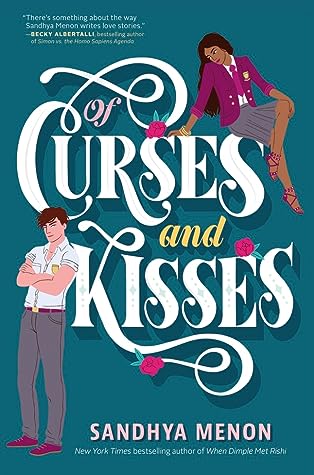 From the New York Times bestselling author of When Dimple Met Rishi comes the first novel in a brand-new series set at an elite international boarding school, that’s a contemporary spin on Beauty and the Beast.

Will the princess save the beast?

For Princess Jaya Rao, nothing is more important than family. When the loathsome Emerson clan steps up their centuries-old feud to target Jaya’s little sister, nothing will keep Jaya from exacting her revenge. Then Jaya finds out she’ll be attending the same elite boarding school as Grey Emerson, and it feels like the opportunity of a lifetime. She knows what she must do: Make Grey fall in love with her and break his heart. But much to Jaya’s annoyance, Grey’s brooding demeanor and lupine blue eyes have drawn her in. There’s simply no way she and her sworn enemy could find their fairy-tale ending…right?

His Lordship Grey Emerson is a misanthrope. Thanks to an ancient curse by a Rao matriarch, Grey knows he’s doomed once he turns eighteen. Sequestered away in the mountains at St. Rosetta’s International Academy, he’s lived an isolated existence—until Jaya Rao bursts into his life, but he can’t shake the feeling that she’s hiding something. Something that might just have to do with the rose-shaped ruby pendant around her neck…

As the stars conspire to keep them apart, Jaya and Grey grapple with questions of love, loyalty, and whether it’s possible to write your own happy ending.

Jaya’s a Princes with a mission of vengeance in mind, in fact, my first impression of her was to immediately support whatever mission she wanted. Why? Jaya doesn’t mind admitting that though she’s a princess, and these are her words, she felt like someone hunched over a cauldron cackling. Need I say more?

She’s smart, a diplomat, and the perfect daughter in every way she can be, and this isn’t because she’s perfect necessarily, it’s because she is that dutiful to her parents and her position. That’s how much she loves her parents and her family, and her people. I think that is so admirable. Even if her vengeance is not exactly admirable, it’s justified from her point of view and it’s easy to understand that.

This is actually my first Menon novel, so I’ll definitely have to go back and read her other books, I loved the style of this! She made you think you were in a modern-day fairytale, it wasn’t so much as ‘A Cinderella Story’ as it was ‘The Descendants’ where there’s this hint of the fantastical and magic.

I loved the twist on the cursed rose, in this story, Menon has made it into a pendant, with 18 rubies, but, you’ll have to read the book to find out how it plays out with the pendant and its rubies.

Grey is exactly what I would want a modern-day beast to be in the setting of St. Rosetta’s academy that Menon has given us and he is relatable as well as more of a main player than some retellings. He is not just a beast, he is a 17 year old young man with feelings and complicated issues, some of those issues are called ‘father,’ lol.

Grey is actually a cinnamon roll, Jaya is the sweet icing on the outside of said cinnamon roll, and together they make the perfect gooey sweet pastry that you want to protect lol.

The side characters were equally loveable and just as well fleshed out as Grey and Jaya and I would say that I actually had her sister Isha and Jaya’s friend Rahul as my favorite characters of the book. I hope I get to read more about all of them in the next one!

I think maybe my only issue was pacing, it had started off slow but Menon was giving us the backstory and setting us all up for the ride of the rest of the plot, so it was understandable. And at the end of the day no matter how much I enjoyed it, it is another retelling of ‘Beauty and the Beast’ so if you like that sort of thing, you’ll enjoy it, if not, probably not lol.

Now. Where’s my Disney TV/Movie series? Because I need it immediately in order to buy Merch for her and Grey, that’s how much I shipped those two.

Thank you so much to Hodder Books for an ARC in exchange for my honest review! 4/5 cups of coffee from me!

8 replies on “Of Curse and Kisses ARC Review”

You should definitely try her contemporary romances as they’re even better than Of Curses and Kisses!

I’m really excited to hear that, do you have one you rec. that I start with?

I can’t wait to read this book! Awesome review💜

This looks like a good book! I’m a big fan of Beauty and the Beast!

Same here! I’m always so happy when we get more retellings of it