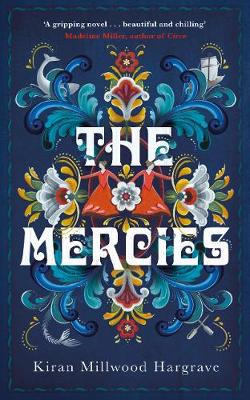 On Christmas Eve, 1617, the sea around the remote Norwegian island of Vardo is thrown into a reckless storm. As Maren Magnusdatter watches, forty fishermen, including her father and brother, are lost to the waves, the menfolk of Vardo wiped out in an instant.

Now the women must fend for themselves.

Eighteen months later, a sinister figure arrives. Summoned from Scotland to take control of a place at the edge of the civilized world, Absalom Cornet knows what he needs to do to bring the women of Vardo to heel. With him travels his young wife, Ursa. In Vardo, and in Maren, Ursa finds something she has never seen before: independent women. But Absalom sees only a place untouched by God and flooded with a mighty and terrible evil, one he must root out at all costs.

Inspired by the real events of the Vardo storm and the 1621 witch trials, Kiran Millwood Hargrave’s The Mercies is a story about how suspicion can twist its way through a community, and a love that may prove as dangerous as it is powerful.

Apparently, Hargrave is here to keep breaking my heart with beautiful stories like she did in The Deathless Girls Review.

Good to know that, because I think now I. can better emotionally prepare for further reads by her!

Seriously though, this novel is stunning. The time period she picked plus the historical events, add all of that to a beautiful f/f storyline and it’s just perfect for me.

There was a darkness that haunted my heart to its core.

The darkness in this book is within the rumours of witchcraft, not the ‘witches’ themselves but what people do when they throw around such a dangerous word in the 1600s.

I could not believe how starkly written this was, it’s like the minimalist of novels but while giving you enough details to paint this beautiful, albeit sad, portrait in your mind.

Hargrave gives us a love story to deepen the emotions of this novel, it is a perfect love story, a touch of tragedy and joy, of the emotional rollercoaster of what it means to love, and the perfect way to make readers weep with the beauty of it.

I know, I sound dramatic but these were my feelings when I finished this at ONE AM, and I am still sat here overwhelmed by the love in the story.

The women have lost their men so they have to take up the slack, but in doing that, it puts them in a position to be seen as suspicious, to be deemed witches by those women who instead of helping with the new way of survival, cling to the tragedy that’s struck.

Maren’s relationship with her sister-in-law is one that warps and bends with the tragedy but ultimately still is capable of some changes whether good or bad, and it made for a very invested reading for me. The relationship between Maren and her Mother was definitely warped and bent, but, I don’t know if there was a glimmer of hope in it after the events of 1617 and that was so heartbreaking to read, to watch a good woman become something a bit chilling.

Women, witchcraft, love, same themes, but done with a different twist. Maren’s love story and the way it progresses is timed and paced with the rest of the events in this novel and it does this all with a low sitting tension, one that rises with each chapter until its climax and then everything begins to unravel or come together, and it made for an intense read.

If you liked the Crucible then you’ll certainly like this book, but it’s definitely a deeper read, just with similar elements.

Five cups of coffee from me, and I’m off to go pick up my special edition of it at Waterstones now.

It’s a beautiful and heartbreaking tale of witch trials, love, and the cruelty of people and the sea. Thank you to the publishers and NetGalley for an eARC of this in exchange for my honest opinion.

10 replies on “The Mercies eARC Review”

I ADORED this book! Everything about it is fantastic isn’t it. The narrative, the agency of the female characters… gosh I loved it.

Ahh I’m so glad we both loved it, you’re so right, every aspect was definitely fantastict!!

oh, i love the sound of this. adding this to my tbr!

I’m really glad you loved this read. It sounds amazing!

The author is doing an event next month at Blackwell’s (I think!). Sounds an amazing book.

Blackwell’s in Edinburgh I should add.

OMG REALLY?! I adored this book and The Deathless Girls, I need to go lol

It’s so weird to think about women during that time.. being so emancipated as we are now was a bad thing back then.. and all you had to do was say ‘WITCH’, and that could be a deathsentence. Even if you were just trying to survive. I wasn’t sure if I wanted to read it, because it didn’t really seem like my story, but there’s f/f romance?! Everything in your review makes me want to read it!

I hope if you get the chance to read it, you’ll like it, I looooved the f/f storyline, but this book definitely ripped my heart out, like you said it’s weird to think of women during that time

[…] Another dark and atmospheric read, but this one is grounded strictly in this world with out the fantastical, it is simply the harsh truth of winter, two women in a forbidden situation, and the struggle to survive as a woman of the times. Check out my review here. […]