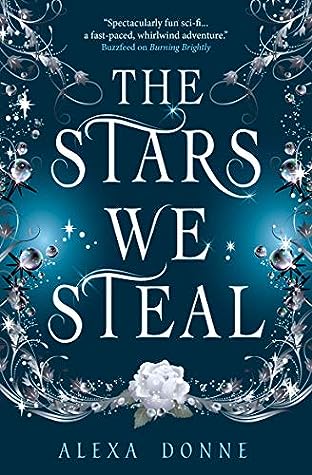 Engagement season is in the air. Eighteen-year-old Princess Leonie “Leo” Kolburg, heir to a faded European spaceship, only has one thing on her mind: which lucky bachelor can save her family from financial ruin?

But when Leo’s childhood friend and first love Elliot returns as the captain of a successful whiskey ship, everything changes. Elliot was the one that got away, the boy Leo’s family deemed to be unsuitable for marriage. Now, he’s the biggest catch of the season and he seems determined to make Leo’s life miserable. But old habits die hard, and as Leo navigates the glittering balls of the Valg Season, she finds herself failing for her first love in a game of love, lies, and past regrets.

This was such a FUN read, it was a bit of Downton Abbey meets Beth Revis’s Across the Universe and that’s not even covering the fact that this is a Scifi retelling of Persuasion with LGBTQ+ Rep.

Can I get a screech of excitement?

Good. If you didn’t screech, that’s okay, I’ll screech for you.

Not to mention the matchmaking and cool space-palaces just made me incredibly happy.

It had everything I like in a novel, we had old first loves, wonderful characters, incredible setting, and just overall fun.

Leo is an MC that you definitely root for, I love that she’s comfortable with the fact that she’s not perfect, and her looks are not the same as say her sister’s, but she knows that she’s beautiful and that she is enough all on her own. That was such an important message I think.

We had an f/f storyline in the background and one of the cast of side characters is asexual as well.

So, yay for some diversity in the characters as far as sexuality and background go, and yay for cool space-ness.

There’s definitely a look at classicism and how ridiculous it can appear to be given that they left earth and its palaces behind. And though I LOVED that so much, it felt like it really wasn’t focused on enough. I thought there was going to be more to it, but it felt like a bit of ‘yes it’s horrible, let’s go eat our yummy food in our fancy clothes’ and at the start that made sense but by the end that was a little disappointing.

The family relationships of Leo and the others were probably the most interesting part for me, I loved that she was so close to her sister and yet so different. And though her cousin was not always the easiest to like, I really enjoyed her personality in comparison to Leo’s.

The matter of Leo and Elliott was sweet and cute, but I don’t know that I really approved of the match. Their first love was sweet but they were different people, and I think I just didn’t get to know Elliott enough to really like him though he did some super awesome things that I’ll not spoil for you all!

So, a bit of a let down on the classicism, a lot of fun on the adventures and hijinks. Great message about loving yourself, and LGBTQ+ rep! Super fun matchmaking things happening, and just a well-paced read with a great twist/retelling of Persuasion.

I would totally recommend this to those who like retellings, and/or SciFi [especially the Across the Universe novels].

Thank you so much to Sarah and Titan Books for a copy of this exchange for my honest opinion. Three and a half huge cups of coffee from me and this wonderfully fun book is out in the universe, tomorrow!!

One reply on “The Stars We Steal Review”