I know yesterday was three mini-reviews, but last night I started another reader copy and now that I’ve finished, I’m going to write this while it’s still fresh. 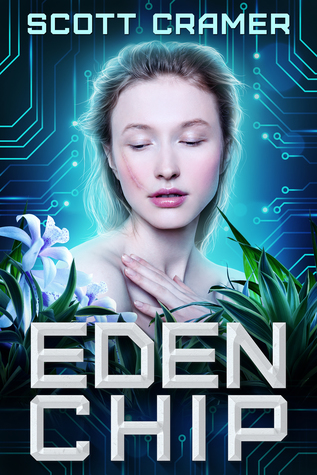 I thought this was a very good sci-fi/dystopia read. I loved the use of chips and how there was always a blurred line to using them, is it okay is it not? I mean you think it’s not okay but once humanity had destroyed itself what choice did they have in this world? But it went too far and it’s on Raissa, Caleb, and Christian to save the world. I really enjoyed the feel of it. and I never thought I’d say this but the reason it didn’t get 4 stars is that it was actually a little too fast-paced; in that I mean it was hard to accept some things that happened as it all happens in the span of a few days. Perfect syncing data or not, love needs to be more slow-burning for this old cynic!

Scott Cramer did a great job with the plot and Christian was by far my favorite character (and also the one I most wanted to kick in the first 30%). He had a lot of complexities and I really admired Raissa’s strength -I mean literal strength, the girl is a tank-, Cramer didn’t make flowery descriptions of her, and he gave her so many cool fight scenes. Also, kudos to having violists, having 2 in one book was the most unbelievable aspect to this whole dystopia novel lol [amiright?].

The first chapter did have me a little iffy because I wondered if this would lose my interest but by chapter 2 I figured this was going to be a book I would want to finish. But be forewarned this sort of novel is the stuff I enjoy reading, it’s like crack to me lol for all I know it’s got Dickensian sentence structure and enough tropes to fill a YA supernatural academy book [I shall not name names].

Raissa has been trained as a rebel, I mean she has spent most of her life, after losing her parents and brother at 6, training to perform one mission. When the time finally comes, it’s nice to see the emotion she displays at having to leave her Grandfather, it reminds you that she’s human. She’s half-French, half-Egyptian I think he states in the novel and from Jerusalem (that’s her on the cover, I’m super concerned by the lack of tan or freckles she’s gotten from living in that sort of geographical setting lol). But still, it’s nice to have a character in this sort of novel that’s not from the U.S.A. Her mission is deadly and has only one possible outcome, she dies so humanity lives in freedom but the reality of what is being planned by the man known as Petrov is something she nor her partner could anticipate.

Caleb is her target, you’ll see for what if you read it, I’ll not spoil anything, but he’s on the side of Petrov, he likes the chips, they keep you from dealing with horrible unproductive emotions and he believes Petrov knows what’s best for humanity. But something happens to plant a seed of doubt.

Lastly, we have my favorite, Christian. He is an older man, he remembers what it was like before chips, but more importantly how does he know so much about the M-Code which is responsible for all the chips do?

Overall this is a solid read and I’m glad I picked it up, I really wasn’t able to put it down once I started it. Anyone looking for an awesome YA steeped in sci-fi with a different sort of dystopia feel might find this worth a quick read.

***I received an advance review copy for free, and I am leaving this review voluntarily.*** [I really enjoy how Booksiren makes you say that you left it voluntarily as if maybe Scott Cramer’s got a stun gun to me, ‘Come on Haley! Write that review, and make it look good!’]

Also, because I’m extra, here’s an article about MIT researchers about an AI chip that could be implanted in us for mobile devices.

I like that we’re seeing people on both side of the conflict here, that always makes it way more interesting. Thanks for reviewing~.

oooooh, I’ve been working on balancing out all the fantasy and contemporary on my TBR with some more sci-fi, and this looks like a pretty decent read! I love complex (and diverse, yay!) characters and extensive worldbuilding. thanks for sharing 💕

I would say that Christian was the most in depth, but I’m not sure our 18 year old lovers are, so be forewarned lol but if you read it I do hope you like it!

hm, thanks for the warning! I guess we’ll see 😜