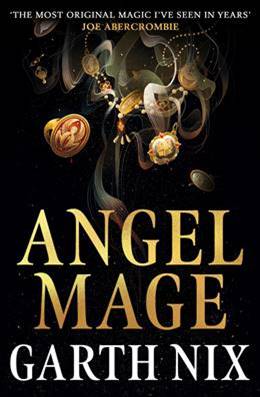 More than a century has passed since Liliath crept into the empty sarcophagus of Saint Marguerite, fleeing the Fall of Ystara. But she emerges from her magical sleep still beautiful, looking no more than nineteen, and once again renews her single-minded quest to be united with her lover, Palleniel, the archangel of Ystara.

A seemingly impossible quest, but Liliath is one of the greatest practitioners of angelic magic to have ever lived, summoning angels and forcing them to do her bidding.

Liliath knew that most of the inhabitants of Ystara died from the Ash Blood plague or were transformed into beastlings, and she herself led the survivors who fled into neighboring Sarance. Now she learns that angels shun the Ystaran’s descendants. If they are touched by angelic magic, their blood will turn to ash. They are known as Refusers, and can only live the most lowly lives.

But Liliath cares nothing for the descendants of her people, save how they can serve her. It is four young Sarancians who hold her interest: Simeon, a studious doctor-in-training; Henri, a dedicated fortune hunter; Agnez, an adventurous musketeer cadet; and Dorotea, an icon-maker and scholar of angelic magic. They are the key to her quest.

The four feel a strange kinship from the moment they meet, but do not know why, or suspect their importance. All become pawns in Liliath’s grand scheme to fulfill her destiny and be united with the love of her life. No matter the cost to everyone else. . .

That’s what my review was at first ^ After taking a couple of days to try and become coherent again, I was able to form full sentences about how kickass this book was.

First off, thanks soooooo much to Gollancz for a copy of this book in exchange for my honest opinion as part of this awesome blog tour.

Now that, that’s been covered, onto the review!

This was an amazing read. If you’ve read or even watched/know about the 3 Musketeers -or just any musketeers in general- then you’re going to probably enjoy this. If you haven’t, you’re still probably going to enjoy it. This is a beautiful homage to Dumas and the adventures of the musketeers. Taking the inspiration from Dumas, Nix completely turns it into something new and vital to fantasy readers.

The magic system is unlike anything else I’ve ever encountered before, using Angel icons, icon makers, and those who choose to use the icons to summon angels for uses, but, each time you call upon an angel it requires a price of you. Each time you summon an angel, it takes a bit, or a lot, of your lifespan, away depending on what you’re asking the angel and what angel you’re asking.

Tell me that’s not unique, mixing that with amazing fantasy worlds and musketeers.

Uniquely, our ‘Angel Mage,’ Liliath, may be the focus of our story, but, our heroes are the four which she seeks. Why? Well, read and find out if you like!

This is also where my 4.5 instead of full 5 cups of coffee rating comes in, the ONLY reason I did not give this the full five [though I’ve rounded up to so on GoodReads because it deserved it and I loved it] is because I really really really wish we would have more of the four ‘musketeers.’ [I also found sometimes chapters went a bit too long with certain details, but, I also enjoyed those details]

Liliath was super well written, holy cow I loved reading about her and her chapters were amazing. The chapters and parts of the book were spread out between her and the four friends and it was great that way, and really well-paced, not a lot of backtracking or feeling like you were missing out on anything. [On that point though I wish I would have known more about Liliath’s past and how she ended up on such a mission as the one she was on.]

I wanted to see them do more, it didn’t even need to be to develop them or huge character growth, I just wanted more time on them to get to know them better or at least see more adventures for them. But. I may just be greedy on that point.

Before this, I had not read anything by Garth Nix, but let me tell you, after today, I intend to keep an eye on this author because his prose was brilliant. He builds a world and he gives you this fantastic magic system and a blend of angels and mages and its own land and you are just craving more by the end.

Damn it. I want moooooore! 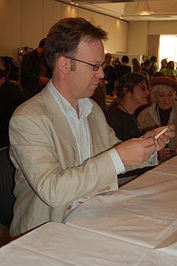 Garth Nix has been a full-time writer since 2001, but has also worked as a literary agent, marketing consultant, book editor, book publicist, book sales representative, bookseller, and as a part-time soldier in the Australian Army Reserve.

Garth’s books include the Old Kingdom fantasy series, comprising Sabriel, Lirael; Abhorsen; Clariel and Goldenhand; SF novels Shade’s Children and A Confusion of Princes; and a Regency romance with magic, Newt’s Emerald. His novels for children include The Ragwitch; the six books of The Seventh Tower sequence; The Keys to the Kingdom series and others. He has co-written several books with Sean Williams, including the Troubletwisters series; Spirit Animals Book Three: Blood Ties; Have Sword, Will Travel; and the forthcoming sequel Let Sleeping Dragons Lie. A contributor to many anthologies and magazines, Garth’s selected short fiction has been collected in Across the Wall and To Hold the Bridge.

More than five million copies of his books have been sold around the world, they have appeared on the bestseller lists of The New York Times, Publishers Weekly and USA Today and his work has been translated into 42 languages. His most recent book is Frogkisser! now being developed as a film by Twentieth Century Fox/Blue Sky Animation.

I have been feeling pretty stuck with fantasy lately as I have been finding them to all be the same and nothing is unique. But the magic system in this one sounds like it could be exactly what I need to pull me out of my fantasy slump! I also have been meaning tor ead more Australian authors while I am here and I think he is an Australian author? If I remember correctly.

[…] this was my final post for Bookend Autumn and I’m handing over my crown to Haley @ The Caffeinated Reader. She has some amazing prompts, and I know her posts will be awesome. Make sure you stop by to read […]

I’m said I didn’t have wifi to do your prompts…looks like I’ll be doing them next week cause they’re too good not to do!

Ok I have one logistic and one content question’

1- I can’t tell from any of the post- who ran this tour? Just curious.

2) Without spoilers- or if you can’t answer without spoiling- dm me on twitter – what did you think of the ending- love? hate? meh?

Because I’ve heard a wide variety of opinions which surprised me.

The publisher, it’s why I only thanked them in my disclosure 🙂 and I thought the ending was satisfying enough, but…like I had wanted more from the four so I was kinda disappoined that was also the end of it all if that makes sense.

Ok! I didnt think Harper ever did their own tours… If you ever care to share that voodoo you do, please let me know. While I’m not overly fond of blog tours… that is one I would have done!

I have heard many that were in the middle ground… it had seemed to be very love or hate. So that is a unique take. I loved it. As for the 4… yes I can definitely see why you feel that way. And I am surprised there isnt another book coming.

I’ve read the blurb for this book before (more of an actual skim, tbh) but this is the first time I’ve realised it’s a Three Musketeers retelling/inspired! Okay, that puts my interest way higher for this book! You sound like you really enjoyed the book and I’m very intrigued by the magic system!