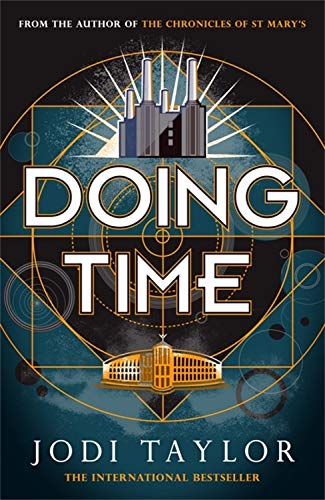 Introducing The Time Police, the brand-new series by international bestselling
author, Jodi Taylor – an irresistible spinoff from the much-loved Chronicles of St
Mary’s series. Perfect reading for fans of Doctor Who, Ben Aaronovitch and Jasper
Fforde.

A long time ago in the future, the secret of time travel became known to all.
Everyone seized the opportunity – and the world nearly ended. There will

always be idiots who want to change history.

And so, the Time Police were formed. An all-powerful, international organisation

tasked with keeping the timeline straight. At all costs.

Their success is legendary, and the Time Wars are over. But now the Time

Police must fight to save a very different future – their own.

This is the story of Jane, Luke and Matthew – arguably the worst recruits
in Time Police history. Or, very possibly, three young people who might just

I don’t think I’ve chuckled so much while reading in a loooong time. This book was. hilarious and the fact it had time travel in it only made it a billion times better [no exaggeration used].

A bit of Dr. Who vibe with the time travel, especially with the St. Mary’s crowd, and a bit of Police Academy, meets Starship Troopers in the humor and police force side of things.

This is a story for those who love the underdogs, our three recruits don’t quite fit the mould and what’s worse, they may not be as bad as everyone thinks…or wants them to be.

There’s the political undercurrent that comes with a good police story, is there corruption, is there plotting and underhanded things going on? Read to find out!

I did enjoy how different the three recruits were, and I enjoyed the light-hearted humor mixed with complex time travel and a plot worthy of a good book.

Jane was perhaps my favorite, the start of her journey as part of the Time Police just amused me way too much to not favor her form the start.

Not to mention they get to go on some crazy adventures. Guys, there’s one involving capturing a rabbit in Australia, do you know how hard I laughed while reading that? Enough that I had to go read in the living room so I wouldn’t keep my husband up.

They go to various different periods in history, so it’s not constantly back in say the Bronze Ages or something, so it keeps it fresh and unexpected.

Despite all the hilarity, time adventures, and intrigue, there is still a good amount of heart with a story that says, maybe, just maybe it’s okay to do things a bit differently.

The three recruits find themselves closer and connected just by their differences from the other Time Police, as they are equally different to each other, but by the act that they share a common thread of wanting to do things a bit differently than the standard expectations of the Time Police. They are stronger together and they all grow into better versions of themselves as the book progresses…some take longer than others, no names mentioned.

Honestly, it was a super enjoyable read for me and I hadn’t read Jodi Taylor’s books beforehand, so, guess who has some reading to catch up on? Meeeee.

A truly entertaining and funny read, four and a half cups of coffee from moi.

Thank you to Anne Cater and Headline Books for a free copy in exchange for my honest opinion for the blog tour.

Jodi Taylor is the internationally bestselling author of the Chronicles of
St Mary’s series, the story of a bunch of disaster-prone individuals who
investigate major historical events in contemporary time. Do NOT call it
time travel!

Born in Bristol and now living in Gloucester (facts both cities vigorously
deny), she spent many years with her head somewhere else, much to the
dismay of family, teachers and employers, before finally deciding to put all
that daydreaming to good use and write a novel. Nearly twenty books later,
she still has no idea what she wants to do when she grows up.

Thanks for the blog tour support x