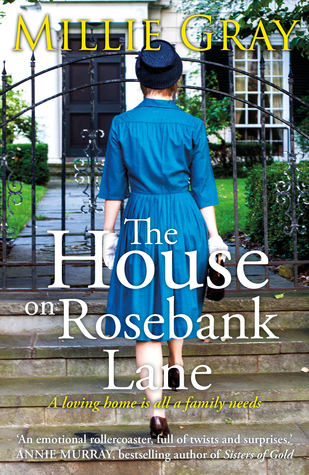 Kirsten Mowat, eighteen years old and with a joyful spring in her step, couldn’t be more in love with her sea-faring sweetheart Duncan Armstrong.

But, seven years later – after a hasty wedding, a twist of lies and wrenching loss – Duncan and Kirsten’s relationship has faded to tatters. When those closest to her turn their backs, Kirsten – alone, with a young family to care for – must gather all her spirit and strength if they are to survive.

From much-loved Millie Gray, The House on Rosebank Lane is an Edinburgh story of families entwined, of sorrow and hopefulness . . . and of a young mother’s love for her children and a transforming quest for happiness.

The object of this story wasn’t the romance but that did fit in nicely [and a good ‘slow burn’ if I may!] it was about the love of Motherhood, and even a bit of Fatherhood at one part. I can honestly say I don’t usually want to read ‘mushy’ or emotional reads but I wanted to read this one as it was a story located in Edinburgh.

This doesn’t drag on, and I think one of my few complaints besides that I didn’t always like Kirsten (and I wouldn’t say that was a complaint) was that I felt it was unresolved where Stella was concerned but I still greatly enjoyed it. I cried a little, got exasperated, sighed in frustration and smiled at the end. Makes for a pretty great read if you ask me.

One reply on “The House on Rosebank Lane eARC Review”