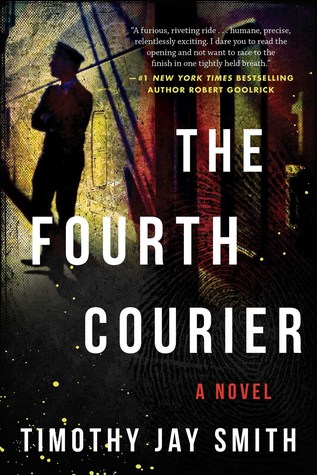 It is 1992 in Warsaw, Poland, and the communist era has just ended. A series of grisly murders suddenly becomes an international case when it’s feared that the victims may have been couriers smuggling nuclear material out of the defunct Soviet Union. The FBI sends an agent to help with the investigation. When he learns that a Russian physicist who designed a portable atomic bomb has disappeared, the race is on to find him—and the bomb—before it ends up in the wrong hands.

Smith’s depiction of post-cold war Poland is gloomily atmospheric and murky in a world where nothing is quite as it seems. Suspenseful, thrilling, and smart, The Fourth Courier brings together a straight white FBI agent and gay black CIA officer as they team up to uncover a gruesome plot involving murder, radioactive contraband, narcissistic government leaders, and unconscionable greed.

Thank you Wunderkind PR, Arcade Publishing, and Timothy Jay Smith for the opportunity to read and review a final copy!

This book was published on April 4, 2019.
[So, just this month, if you’re looking for a new release to read in crime thrillers, this could be for you!]

[**I am giving my honest review in exchange, nothing less, nothing more!**]

So now you’ve read the blurb, and well if you like thriller novels and unique settings, this one may be the read for you!

Timothy Jay Smith gives us something unique by setting his story in post-cold war Poland, and it’s great to travel to Warsaw in the 90s through his prose. Not to mention it’s fun to watch how differently our FBI Agent Jay works compared to Kurt, our CIA man.

The plot is interesting and the pacing is really well done. It’s not often we get to see espionage in such an appropriate time in history as far as book settings go! I really enjoyed Smith’s narrative voice and honestly loved the ending.

I think my two issues were the only things holding me back from marking this as 4 Cups of Coffee. Firstly, I really didn’t like the women they way they were written, not so much Basia, she was not meant to be a ‘good’ character (as in morals), and that’s fine, always love someone you can loathe a little in a book but at the same time you get where she’s coming from. She’s a survivor, she doesn’t give a crap about your feelings. And secondly, I just wanted more espionage and less Jay going on dates 😉 I was happy for the man, but I’m always one to rally for more espionage over romance so while this might be a problem for me, it could also be the reason someone else reads it and I hope you all reading the review will give this a chance if this sounds enjoyable to you!

Another thing I found that I enjoyed and it was such a small detail that it surprised me, was the fact that Jay was separated from his children and he missed them, actively thought of them and people just forget that dads are capable of that too and I thought that was just a splendid small detail for Smith to add about Jay.

Once more I am so grateful for the opportunity to have read this, now please let’s all cross fingers that Timothy Jay Smith continues writing and gives us all the espionage too.

[I know it’s not always clear what my ratings mean but 3/5 Cups means that I enjoyed reading the book and would certainly recommend it to others who liked the genre. And in fact tomorrow I’ll be diving more into critiquing and reading for my post!]

2 replies on “The Fourth Courier Review”

That is a great perspective to include in a book because it is true. Not all dads are deadbeat dads. Some do actually care, love and want to be apart of their children’s lives. That should be represented in books more rather than just the stereotype. Yes that stereotype exists and should be in books too. But dads who love their kids and divorced parents who get along and co-parents should be represented should also be in books.

This seems so interesting! I like that it shows the dad actively missing his family. Spy novels also sound like they would be a lot of fun.