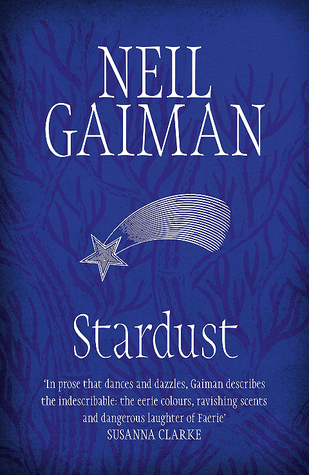 I hope you get to Good Omens soon. It’s awesome!

I haven’t read Neil Gaiman yet either (okay, I read Coraline with my son years ago, but I feel like I need to read some of his meatier works for it to really count). I have him on my TBR for this year, though, and I’m looking forward to discovering what so many people enjoy about him! I’m glad you liked this!!!

I watched the movie first too, I loved it. I read Stardust last year and really liked it!

I’ve been slowly getting into Neil Gaiman books, and while I didn’t know this was a movie I’ll have to check them both out! Good Omens honestly isn’t my favorite just because I didn’t quite get the sense of humor, but American Gods is fascinating and I’ve really liked some of his other books. (also, I’m jealous of your ability to enjoy movie adaptations … I’m ready to fight at least half the ones I’ve seen!)

I love faerie tales and the characters sound intriguing, so I’m off to see if my library has this one 😉

I’m afraid I won’t like Good Omens, mostly because I look at it and the copy I have has ITTY BITTY font and I’m like ‘nah…I don’t need this kind of negativity in my life.’ I have learned to just think of movies like…just really fancy fan art for books. It helps me not get annoyed. And I hope your library has it! It’s awesome and it’s spectacularly short as well lol.

that’s definitely an interesting way to think about it, I’ll try that out next time I go see an adaptation! 🤔 and yay for short books to help get through my TBR and reading challenges 😂