My name is Kim ten Tusscher. Writing hasn’t always been on top of my mind.
In my twenties I pursued a career in photography. During my study, I got
interested by documentary photography. I looked for similarities between
people and tried to invalidate prejudice. The camera gave me access to ‘other’
worlds, but also created a distance to my subject I would rather not have.

In my final year, I travelled to the Pine Ridge Indian Reservation in South Dakota.
I came back with much more than pictures. The culture of these people proved
to be a lasting source of inspiration. My experiences with these people end up in
my stories in many different ways.

Than I rediscovered writing and fell in love with it. Fantasy proved a great way
of exploring the world around me. The intense subjects I write about, challenge
me to make sense of what’s happening around me in real live. I love to read
stories that are set in the grey area between good and evil, so that’s also what
I write. I’m known for creating convincing characters and a world which isn’t
black or white. As a writer, I have overcome the distance I felt towards my
subject when I was a photographer.

My stories have gathered a loyal group of readers. My latest book “Prooi” has been nominated for all the Dutch awards for
Best Fantasy Book 2015.

Do you want to know more about me and my books? Please follow me on social media.

Yes, it is a strange world nowadays, isn’t it? In the Netherlands, we have what they call an intellectual lockdown, which means we are free to go outside, but we have to keep distance and use our common sense. I miss visiting friends and family, taking walks and going to museums, but the most important thing is that I, my family and others stay safe.

Except for the lack of social visits, my life stayed pretty much the same. I was used to spending much time at home and writing. I’m not a person that worries a lot, so the virus doesn’t scare me personally. In a way, the lockdown means I get fewer distractions. Which is a good thing, because the deadline for my tenth fantasy book is approaching rapidly. Fortunately, I was able to write a lot in the last few weeks.

As of reading, I just finished Fool’s Fate by Robin Hobb. I often read her books when I’m in the last stage of writing a book because of the difference between her and my writing style gets me in the right mindset.

When Karen, the lead singer of Seven Waters approached me with the idea, I felt so honored. Soon after she send me the first sample. It was only the music without singing, but I loved the vibe it had. Her voice just makes the song complete. It’s awesome when an artist uses my stories for inspiration and creates something. It adds another layer to the story I wanted to tell.

Hunter’s Prey was an awesome project to work on. When the song was finished, Karen and I thought it needed an epic video clip, so we started crowdfunding. We found a director, actors, I made the costumes… we even had “wolves” on set. I don’t know many authors who have done a project like this, so I feel very fortunate.

I’m a hybrid author. In the Netherlands, I’m published with a traditional publisher. But for the foreign market, I wasn’t sure what to do: go and find an agent or become an indie publisher. I visited WorldCon Helsinki and my main focus was to find out what I would do. I listened to agents and to other self-published authors to get an answer.

Soon after WorldCon, I decided that becoming an indie author was the way forward for me. Thing is, I have to get the books translated anyway because an agent has to be able to read it. Getting a book translated is not cheap. If an agent would be interested, he or she might suggest changes. I would do the rewrite in Dutch because my English isn’t well enough for storytelling, but then I would have to get it translated again. If I would be lucky enough to find an agent who would land me a publishing deal, the publisher might suggest some more changes. Which I had to do in Dutch again… I think you get the idea. 😉

Because my Dutch publisher had already done all the editing, I was sure my books were ready to go onto the market straight away. And I really do believe I can make this a success. What I found out later is that I also really enjoy the process of indie publishing. I love finding out how everything works, interpreting the data I collect and being in charge of it all.

Thank you so much!

There was a big difference between writing Hydrhaga and Bound in Darkness, the first part of the trilogy. Hydrhaga was my debut novel and when I wrote it, I didn’t think anybody else but me would ever read it. But when I finished it, other people were curious. So I let them read it and they were excited. My mother learned me that sometimes you have to take a leap of faith. After all the work I put into it, I thought it was a shame to leave it in a drawer. So I send it to some publishers. One of them picked it up. Many rounds of editing and rewriting followed, from which I learned so much.

Then I started Lilith’s story. My publisher was interested from the start, so I knew people would one day read it. That made so much difference. Knowing other people will read it, is a scary thought. I took a more serious approach with this story; added more depth and gave it more thought before I started it.

I’m very proud of both stories, but I think when you read them you can sense the difference. Hydrhaga is a bit more quirky, the Lilith trilogy is more serious and deals with bigger issues like trust and responsibilities that come with great power (Lilith is a woman who can change into a dragon). I also decided to play with the concept that there is no ultimate evil and no ultimate goodness. Every character is morally grey. That became my trademark.

I love to write about Lilith. She is such a layered character. At the start of the story, she’s very angry and insecure. Later she develops into a stronger character. Of course, she was physically strong from the beginning, but mentally she was very unstable. I love the complex diversity in her character when I write about her.

The most difficult character is one that plays a huge role in my new book. She is not really human and she finds it really hard to understand life. It’s hard to get her motivations across so the readers are willing to spend time getting to know her. But she is also a very abstract being, which makes it hard to describe her and her actions. It’s a challenge to write about her, but slowly I’m getting there.

I would like the company of Az-Zhara, Niul, and Lilith.

I’m a bit in doubt about Lilith. I love her and want to get to know her in person, but I can imagine she’d be very angry about what I have put her through. And she is a fire breathing dragon, so I fear for my safety.

I hope Az-Zhara will be there too. He has a very calm personality and could temper any heated discussions between Lilith and me. Az-Zhara is also very creative, so he could teach us woodworking or other things to keep us busy during the quarantine. Just to keep Lilith’s mind of the fact that I let the sorcerer Kasimirh use her as a weapon in the war. And that I didn’t give her much peace when she decided to run away. (I’m really sorry, Lilith!)

Niul is an elder from a clan that lives far to the north. He and his people follow the rhythm of nature. He has great stories to tell and much wisdom to share. I would love to spend time just listening to him while sitting by a campfire at night.

I am one of these strange writers who doesn’t have multiple stories in their heads. I only have the story I’m working on at the moment and a faint idea of the next one I’m going to write. I think this is because my stories are so complex. They are set in a large world and told from multiple viewpoints.

Don’t let the idea that the story has to match certain standards stop you from writing. The first draft of any story is about getting the story onto the paper. About getting to know the setting and the characters. Don’t worry about grammar, genre conventions, clichés, and readers. Those are things you can deal with in a later stage of the process. First and foremost, you have to know what you want to write and what you are capable of writing.

When you start my books, don’t expect a story about glorious heroes and dark and twisted villains. Don’t be surprised if you have to change your mind about someone in the middle of the story. I explore the morally grey area between good and evil. We are all capable of both, it depends on the circumstances which of the two finds it’s way to the surface.

[**Note from your beloved caffeinated reviewer: Please remember that reviews help books out immensely, but especially INDIE books and their authors!**] 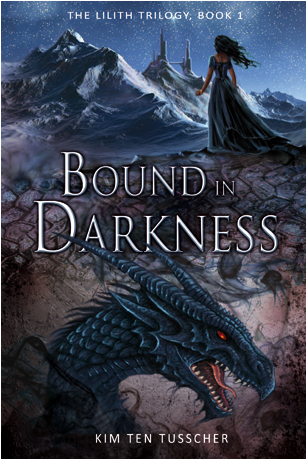 Lilith, a young and rare dragon changer, was stolen by the uncompromising prophet Kasimirh when she was a baby. The prophet aims to convert the world to the faith of Jacob and does not shy from bloody war to achieve his goal.

Kasimirh uses Lilith as a tool of mass destruction to terrorise his enemies into submission. When Lilith, after years of indoctrination, begins to apprehend the scale and gruesomeness of the acts she commited in the name of Jacob, she decides to flee. But Kasimirh does not allow her to end the twisted relationship between master and servant so easily…

WHO CAN YOU TRUST, IF YOU ARE THE ULTIMATE WEAPON?

In the first book in the Lilith trilogy, ‘Bound in Darkness’, the fugitive Lilith is captured and put to work in the palace of the king of Merzia. Her relatively peaceful days are over when Ferhdessar, the court magician and advisor to the king, realises who and what she really is. He intends to use Lilith as a weapon against her former master, his archrival Kasimirh, who is about to attack and invade Merzia with his army. But can the cold, aloof Ferhdessar be trusted.

Does this sound as awesome to you all as it does to me??

Also, there’s an option to buy the whole trilogy on Amazon and it’s FREE on KU [Kindle Unlimited]