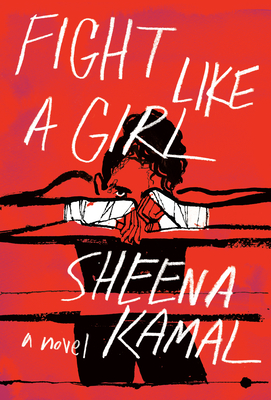 Love and violence. In some families they’re bound up together, dysfunctional and poisonous, passed from generation to generation like eye color or a quirk of smile. Trisha’s trying to break the chain, channeling her violent impulses into Muay Thai kickboxing, an unlikely sport for a slightly built girl of Trinidadian descent. Her father comes and goes as he pleases, his presence adding a layer of tension to Toronto’s east-end townhouse Trisha and her mom call home, every punch he lands on her mother carving itself indelibly into Trisha’s mind. Until the night he wanders out drunk in front of the car Trisha is driving, practicing on her learner’s permit, her mother in the passenger seat. Her father is killed, and her mother seems strangely at peace. Lighter, somehow. Trisha doesn’t know exactly what happened that night, but she’s afraid it’s going to happen again. Her mom has a new man in her life and the patterns, they are repeating.

A life with a mother who has given up everything for her, and immigrated to the states, and a father who visits them from home but is virtually a stranger still.

The narrative style in this is very unique, it’s one that I’ve encountered a handful of times but as I don’t read a lot of contemporary it’s always refreshing to have an Author who defies the usual.

This story is told from our MC, Trish’s POV. She is a teenage Muy-Thai fighter in her senior year of high school. Known as ‘Lucky’ at the gym due to her inability to win a ‘real’ match, though she holds her own in practice and demos.

It’s easy to see the appeal and lure of the gym to Trish, it’s a place to escape, especially the few times her father is around. Especially considering the fact that he uses domestic violence as a tool on her Mother.

The between Trish and her mother is complex and you get the sense that her Mother sees Trish as a possession more than a daughter at times, and the domestic violence sadly does not end with her Father in this story.

After the terrible accident that leaves Trish’s father dead, she starts to wonder if there’s more to it than just an accident and follows a trail that could irrecoverably change how she sees her mother and the women in her life. This also means that she tries more and more to escape to the gym.

I don’t want to spoil this story, it’s fast-paced and there’s a lot of facets to Trish and the problems in her life. Overall I would say I really enjoyed this, I just wish I would have known more about Trish before and after the death of her father, but, this story is a glimpse, we’re given what we need and this is the story Trish wants to tell us.

I love the cultural aspects of this, my mother came over as an immigrant to the States, so it’s always nice to see people who have multicultural lives and backgrounds.

Three and a half cups of coffee from me, this was a great read, and keep an eye out, I may be giving my copy away to a teen reader soon! Thanks to HotKeys YA for a copy of this in exchange for my honest review.

One reply on “Fight Like a Girl ARC Review”

This sounds so interesting!