[Cool Featured image is brought to you by sifaelizabethreads.wordpress.com who is also part of the tour! Thank you for use of the banner!] 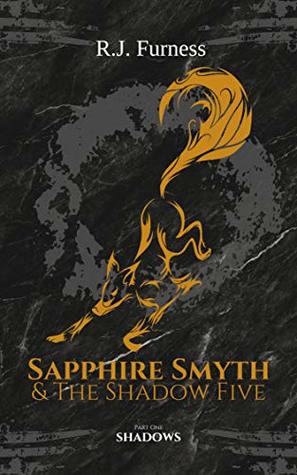 Have you ever seen something you can’t explain? Did it vanish as fast as it appeared? Perhaps that thing you saw was lurking in the shadows, and you caught a glimpse of it before it went back into hiding. There’s a good chance, of course, that the thing you saw simply emerged from your imagination. Or maybe, just maybe, it didn’t…

Sapphire Smyth is no stranger to rejection. When she was only a baby, her father abandoned her after her mother died. Since then, Sapphire has never felt like she belonged anywhere, or with anyone. To make things worse, her foster carers have now turned their back on her – on her eighteenth birthday. After living with them throughout her childhood, Sapphire has to find a new home. Is it any wonder she finds it hard to trust people?

Abandoned by the people she called family, Sapphire is alone and searching for some meaning in her life. Except that meaning has already come looking for her. When she discovers mysterious creatures lurking in the shadows, Sapphire soon realises that her fate is unlike anything she had ever imagined.

I’m always really fond of serials, I think they’re such a great way to dive into a bookish world while allowing you the freedom to discover it over a number of books. There’s something so great about being allowed to either wait in between books or if you’re lucky just go and dive right into the next one if it’s out. In this case, you’ve got a few you can dive right into if you decide to join Sapphire in her fantastical journey in finding out who she is and what she’s capable of.

Sapphire is young and afraid of what’s happening to her and you feel that her reactions are probably valid given that she’s alone in the dark when things start to get a bit strange.

She’s got a caring best friend, a mysterious bracelet that belonged to her mother, and something is going on in the shadows.

I was really curious about what was going to happen to her, and I really wanted to figure it out, haha I was like Sapphire, ‘what is going on?!’ It id make you feel the tension for her and I have to say it was overall an enjoyable and quick read.

Coming to that point, it really was a short read, it’s the first in a serial series and so it’s not meant to be very long, and I loved that.

But now, it’s time for me to talk about the negatives for me. Though I felt Sapphire had every right to be afraid and confused, there was something I just couldn’t stand about her. Because I couldn’t get over this, it made the really awesome parts of the story a bit dimmer for me, BUT do not let me stop you from trying this because there are cool shadow creatures and an adorable shadow fox.

I didn’t put a rating as I wasn’t sure what to give it, so, read the other awesome reviews from the tour and see if you’ll give it a try. Thank you to the author and The Write Reads group for giving me a copy of this in exchange for my honest opinion!

R. J. Furness has been passionate about great stories since he was able to read. At an early age, he would frequently create new characters, worlds and creatures, then write crazy tales all about them. However, until now, he has always kept those ideas completely secret. After having a lifelong interest in animals, music and anything spawned from pure imagination, R.J.’s first love are now his wife and children. Over time, he has also developed an overwhelming desire for mugs of tea and good biscuits to dunk. He lives in Southport, England, with his family, a dog and several fish, chickens and quails.

Some of the hardest books for me to review are ones where I really like the story but the protagonist makes me beat my head against the wall- and not in a way where I like them and they just don’t act in their best interest but they just irk you. I can completely relate to how you felt.