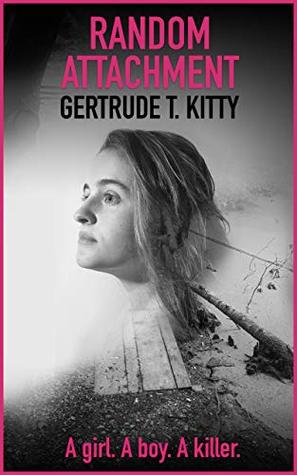 A coming of age, dark, humorous, romantic thriller. A twenty-first century Cinderella. The protagonist, seventeen year old Mia Dent, is overweight, unhappy, dormant at school and a crutch for her alcoholic mother. Together they live on a dangerous West London estate. On route to school one morning Mia spots Flynn Mason; he is the catalyst to change. In Mia’s imagination she constructs a personality and a back story for Flynn. She fantasises about them together. Following a second sighting she begins to purposely seek him out. In the background The Wolf is abducting young women and whilst Mia watches Flynn the watcher becomes the watched.

For older [YA] readers.

I haven’t read many YA Thrillers and so my knowledge is limited I would say, but, I absolutely adored this one.

Thank you Gertrude T. Kitty for sending me a copy, I’m happy to leave my review after devouring this book.

Because that’s what happens, you devour it.

This is not without its faults but we’ll get to the good stuff first!

[Very Minor Spoiler here and there but doesn’t give too much away as the book does go from present to past so things are revealed but not put together all at once.]

Mia is someone who goes through so much shit, really, she has a horrible home life and her mother is basically evil incarnate. You sympathize SO MUCH for her as you read along and you cheer her onward in her bettering herself, in her mental health and with treating her body as something more than to be ignored.

She goes through weight loss, as she’s realized her attachment to food is unhealthy. [Remember there is absolutely nothing wrong with being overweight, but her relationship with food was using it to ignore other things wrong in her life and Mia deals with that in a better manner, nor does she really starve herself or deny herself foods she likes as she loses the weight, she just finds her appetite has diminished as her focus changes gears.]

Mia ups her game at school realizing her best shot of getting out of this horrible cycle of life with her mom is go off to Uni and be far away.

However, not everything happens according to plan and though Mia perseveres through her troubles, she’s handed more and more as she goes as well. Her father’s health is not the greatest, and she’s developed a new unhealthy obsession. Flynn.

What starts out as an innocent fantasy of romanticizing a stranger turns into something more as she finds herself in such a spiral that she has become a stalker. Her attraction to him borders on unhealthy and any manner of this sort of behavior should never ever be rewarded in real life. However since this is not real life, Mia finds herself interacting with Flynn and it ends up in a restraining order, this is good because it does show there is a consequence to her actions but I do feel that the plot with Flynn is not something I want to encourage as they progress past that.

However, there is something else going on in the streets of London, young girls have gone missing ‘The Wolf’ is at hand and there are already two bodies on his counter. But, who is this man, and what is his connection to Mia, and why is he so fascinated with her?

Can I just say that the parallel between The Wolf and Mia as both people who have stalked is actually super intriguing and Kitty pulls it off really well by showing you how it can be in extremes and that Mia in a way has a connection to The Wolf in that they both have kept an eye on what they want.

I think that Mia and Flynn’s origins of their arc is the only thing I have a really hard time dealing with. I loved them, but I really hated that something came from her stalking. Remember this is a story, in real life guys, this will never happen and it is not something to glorify. This is the only reason I didn’t give it five stars to be fair.

But back to other good things, I loved how Kitty shows the police mishandling so much because of a prejudice against Mia and it shows how it can put so much else at risk. Not to mention I loved how horrible Mia’s mom was, and not because it was ‘juicy’ but because she seems like such a real person, which is horrifying but great because it sucks you more into the story and has you rooting for Mia all the more.

Kitty’s manner of storytelling is wonderful, she has a great way with words and aside from a couple of minor typos the rest of the book was flawless in her style, as far as my tastes go!

If you are okay with things I have mentioned or keep them in mind and are intrigued I highly suggest reading this and I truly, truly hope that we see more thrillers/writing from Gertrude T. Kitty in the near future.

now that you mention it I don’t think I’ve read any YA thrillers, because I haven’t been a huge fan of the adult thrillers that I’ve read – but I do still relate more strongly to YA than adult so it might make a difference? I’m certainly willing to give it a try, and Random Attachment definitely sounds like a fascinating book to start with. great review, Haley!