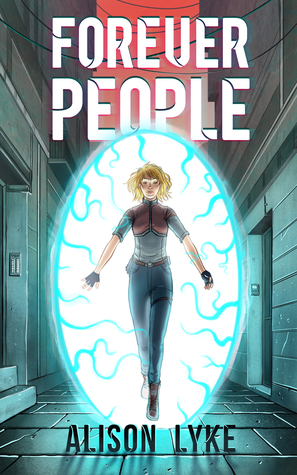 GoodReads Blurb: Welcome to Zeta City, where the whole world goes to die. Here, the Node System uploads the minds of the dying so they can spend eternity in a digital Promised Land. But, this cyber heaven is causing hell on earth for the living because the System forces them to earn Points to buy data in the afterlife.

Camille is a salty mercenary out to hoard as many Points as possible by exploiting the dying with illegal technology. She’s on the hunt for Toy, a rebel leader who uploaded lethal technology to her own brain in an attempt to wipe out everyone’s Node Points.

Camille goes to increasingly dangerous lengths in pursuit of Toy. She soon finds that the Node is full of warm reunions with loved ones and otherworldly creations. It’s also full of lies.

Hi there guys! So today, as you can see from my post header, I am part of a blog tour for Forever People with R&R Book Tours and I’m here to lay down a review for you all. But first here’s a taster for the book.

Camille had three kinds of clients: those who were trying to extract funds or rare items from someone else before they died, those looking to find a loved one before they died, and regulars with a myriad of shady reasons for needing repeated, illegal services. Wren Barrett was Camille’s favorite type of the three. He was a balding account manager, from the Delta Zone, who’d come to Zeta City to find his son. Like most others arriving in Zeta for the first time, he was ill-equipped, soft, and confused.

He washed up in Camille’s office like a beached manatee: gasping for air and bleached by the sun. Her office walls were stark white, as was her desk and other furniture, and even the floor, giving the woman herself the appearance of a smudge on a piece of blank paper.

Camille wore a grey tank top, black shorts, and she was unadorned aside from her wrist mounted reality augmentation device. The device’s long touch-sensitive screen and pad ran down her forearm; her RAP was an impressive piece of technology that marked her as wealthy and well connected. She also had a mop of frizzy, black hair that hung raggedly around her ears.

While Wren Barrett spoke, Camille sipped on an orange juice box straw and watched him closely. Mr. Barrett’s son was dying. Sashi Barrett was born dying, even more so than the rest of us. Sashi had a heart condition that made life a painful struggle. So, Sashi did what many people from all over the world do when they want to die; he came to Zeta City.

Zeta City was the capital of the Zeta Net, so-called because the entire area was covered by a wireless network designed to upload people’s consciousness at the time of death and store it in the Node’s massive computer system. Zeta was not the only Net, there were dozens of others, but many people chose Zeta because Zeta was the first netted city in the world.

Generations of people made pilgrimages to Zeta before the other Nets were built, and now some people superstitiously clung to it as the place to go to die. Maybe it was because Zeta gave the world the first promise of a tangible afterlife. “Going to die in Zeta” was the new “going to church on Sunday.”

“You can find Sashi?” Mr. Barrett asked sadly, “you can keep him alive?”

“I can find him and keep him alive, more or less, until you’re ready to let him go into the Node. I accept cash and other forms of payment. You know what I mean,” Camille said.

“Of course. I’ll transfer two-thousand Node Points to you, as a thank you for your service, along with four hundred in cash. Does that work?”

When Camille stood up to shake Mr. Barrett’s hands, he was surprised to see that she that she was a thick woman with large breasts and the hint of a belly. He was expecting a fit, muscled mercenary. Then he realized, there was no reason for her to be fit, most of her bounties couldn’t run away. . . . .

Camille found Sashi, who was a boy – twenty at the most – in an alley two blocks from the Water Street Gate, in an area known for drug abuse and homelessness. He was a heap of bones and in dirty, Central Charity-issued clothes. His method of suicide, a drawn-out opiate overdose, was not doing him any favors. Camille double-checked the hologram on her wrist RAP to verify his identity, and then crouched next to him.

“You wanna tell me why you’re trying to die?” Camille asked him softly. He took a moment to answer. It was clear that he hadn’t carried on a conversation for quite some time.

“Death in the Node has got to be better than life here.” He struggled.

Her suicidal bounties always gave some form of that same statement as their reason for killing themselves.

“You got enough Node Points, kiddo? Don’t want to die without enough of those NPs.” Camille always asked her dying bounties some form of that question. It turned out that Sashi had more than enough Node Points to have a comfortable afterlife. The wealth that afforded his addiction would also support him in death. It wasn’t supposed to work that way, that wasn’t how the Founders set it up, but the Founders were long gone down the Node’s rabbit hole.

“Do you want to see your dad before you go? He’s the one who sent me,” Camille asked. Sashi’s dull eyes lit up, and faded just as fast.

“I won’t make it through the hour,” he mumbled.

“It’s okay. I have a Confiner.” Camille tapped her wrist RAP. She called Mr. Barrett and then hovered over Sashi in the alley for the rest of the afternoon. The device within her wrist RAP stabilized the electronic version of Sashi’s mind inside his body, and it would last as long as she was close to him. Once she turned off the Confiner or moved away from the deceased, his consciousness would release into the Net and, eventually, be uploaded into the Node. The technology wasn’t above the table, but it was also quite rare.

Camille would have preferred moving Sashi to her place, which functioned as an office, apartment, and an occasional hospice, but he did not want to move and she was compelled to accommodate the dying. Sashi did die before his father came, forcing Camille to use the Confiner.

Camille often chased after debtors and thieves who were trying to die before they could be seized. She would hold them, in their dead, damaged bodies until they resolved their issues with their victims or creditors. But some days, like that day with Sashi, were just sad and slow. On these days, Camille felt like an angel, guiding the broken home.

She stood about fifteen feet away from Mr. Barrett and his dead son (the farthest that the Confiner could reach and still hold the dead in place) as they spoke softly and tearfully. The boy’s mother, who had been estranged from both of them, showed up.

Afterward, Camille went home to her apartment, which was on the other side of a door in the back of her office. She left the clinical, white room for the for the chaos and color of her own apartment. She checked her wrist RAP to make sure that Mr. Barrett had transferred the promised Points. Satisfied, she unhooked the device from her wrist and set it on her coffee table. She sat down on her sofa and cried for several minutes before tearfully ordering wild mushroom soup and crusty bread from her favorite diner.

The next morning, Camille received a call from her least favorite kind of client, a regular named Cody. He wanted Camille to extract a young woman, named Toy, from an old cabin on the edge of Zeta’s bayou and bring her to Camille’s office, if possible. Otherwise, Camille was to confine Toy in place until Cody arrived.

Forever People has just the sort of juicy sci-fi almost dystopia premise that I just love. The real world is the pits, no better than what we have here and now, but there’s a glimmer of hope, collect your Node Points and have an amazing afterlife with everything you could ever wish for, as long as you have the right amount of points, right?

Camille has been collecting an almost obscene amount of Node Points, or NPs as they’re called, and she has her own reasons for wanting so many, aside from a cushy afterlife of course. This leads her to take on a lot of jobs others wouldn’t, including hunting down Toy.

Unfortunately, this is one job that may just be too much and Camille is forced to push at the boundaries of what is perceived to be possible. Will she travel to the Node, and what will she find out when she gets there?

This is a great paced book, it’s all go from page one and I truly love Camille, she enjoys eating and doesn’t care what others think and let me tell you, food might be my soulmate, so I’ve connected on a deeply spiritual level with Camille. There’s also a great cast of characters surrounding her and everyone serves their purpose even if you don’t’ think they do. There was one character I wasn’t even sure why they were included when suddenly in one chapter Lyke connects all the dots leaving you going ‘oh..OOOOooh!’

I think that the world building could have been explored more, and maybe gotten a bit more into Camille’s psyche. Though my biggest complaint would maybe be that I felt the ending was too abrupt, that with a little tweaking on how it worked it would have been perfect and I did enjoy the direction it went into so really I can’t complain very much at all.

This was a thoroughly creative work on Lyke’s part and it reminded me a lot of Ready Player One meets Surrogates which is pretty brilliant because while those are what I would compare Forever People to, Forever People is something all its own and completely unique to me. I also love the twist I thought it was SO appropriate.

Wrapping this up, if you want to have a neat sci-fi novel with Node Points that affect your afterlife and a very cool glimpse into this afterlife with a strong quirky female protagonist, then let me be the first to recommend Forever People. 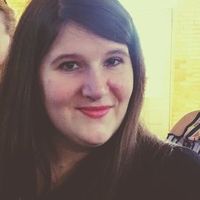 I’m an author and an English and Communications professor from Rochester, NY. I’m an insatiable reader and a dedicated writer. I’ve spent many years honing my skills and I now enjoy helping others find and explore their own voices. I write fantasy and science fiction and I aim to captivate and inspire. I’ve written two published novels: a modern mythology titled Honey, which came out in 2013 and Forever People, a cyberpunk science fiction slated to come out in the spring of 2019. I also regularly contribute poetry and short stories to literary magazines.

Want a chance to get it for free? Click on the Rafflecopter link below which will open a new tab to the giveaway.

Digital copy of the book, a Rafflecopter Giveaway

Thank you R&R Book Tours and Alison Lyke for the opportunity to read this fun book! I did receive it for free in exchange for an honest review, I have not been paid nor has my review been affected by this.

The Magic of Wor(l)ds (Excerpt) http://themagicofworlds.wordpress.com

B is For Book Review (Excerpt) https://bforbookreview.wordpress.com