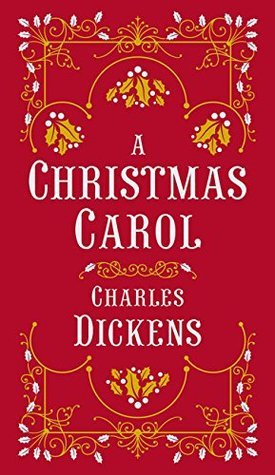 A Christmas Carol is a novella by English author Charles Dickens. It was first published by Chapman & Hall on 19 December 1843. Carol tells the story of a bitter old miser named Ebenezer Scrooge and his transformation resulting from a supernatural visit by the ghost of his former business partner Jacob Marley and the Ghosts of Christmases Past, Present and Yet to Come. The novella met with instant success and critical acclaim. The book was written and published in early Victorian era Britain, a period when there was strong nostalgia for old Christmas traditions together with the introduction of new customs, such as Christmas trees and greeting cards. Dickens’ sources for the tale appear to be many and varied, but are, principally, the humiliating experiences of his childhood, his sympathy for the poor, and various Christmas stories and fairy tales.

I have loved this book since I was about like 12, I have no regrets in loving this, it is something to thaw out my dark little demon heart. I may be more like Scrooge in my social skills but not my bank account, though, I have nothing in that so it’s easy to share ahahahaha *sob*

Anyway, I think this is a really nice tale that gives Christmas a sort of meaning that doesn’t need religion but is still about this sense of goodness and giving that can be associated with Jesus, don’t worry, not going to get religious on you all.

Anyway, spirit of giving was born from this book in a lot of ways and I can honestly say that it is such a sentimental read for me personally.

If Dickens doesn’t please you though there are plenty of retellings, especially in the world of film and tv!

Anyway, I’m not going to do a full blown review on this, I’ve read it at least twice, and loved it every time, if you think you might enjoy classics or generally do, it might be worth a shot but if not, that’s okay, just ignore this part and get to the movies lol.

5/5 Cups of hot chocolate from me.

I mean it’s Bill Murray so of course this is over the top and ridiculous (in the best of ways!).

Also, seeing a big shot of TV in place of Scrooge is just so perfect 80s, this is really a product of its time, but such a good movie for me. Maybe it’s because it came out the year I was born (yes, indeed, I am that old).

I think the ghosts are my favorites in this adaptation, I enjoy the over the top violence and parody of the 80s, money, and the book itself, it makes it a bit more relatable in some ways, and not so much in others.

It is a bit ‘scary’ so not as family friendly as my next pick, the Muppets version, but it is a lot more fun to watch as an adult, still has a happy ending, but gives you darker humor.

The addition of this also has a romance arc for our Scrooge and it’s a pretty nice addition, yes, it defeats the purpose of Scrooge not getting a romance in the end, his actions did have consequences, but, it gives this movie a little fun twist.

Guns, ghouls, Murray, and the craziest tv production of a classic being headed by Billy Murray gives us the delight that is Scrooged.

Ah, do you hear that? It’s the sound of perfection.

Shhh, don’t judge me, I have always loved this movie so so much.

It’s another great adaptation but obviously completely different than Scrooged.

The humor in this is lighthearted mixed with sarcasm/dry humor at times and there are of course muppets instead of all people lol though our Scrooge is human in this and played by the fabulously awesome Michael Caine.

In this version, our story has a narrator and a visible ‘audience’ in Gonzo and Rizzo and the story is kept to a more heartwarming version like Dickens’ version but with music set to it as well.

I LOVE the songs in this and I loved the muppet ghosts, again, I think the sort of ghosts used in these adaptations really make it or break it for me.

This doesn’t stray as far from the original tale but still gives it a great rendition. I think that it gives enough originality as well though.

Very family friendly, I definitely force the spawn to sit and watch this movie once a year, but don’t worry guys, she loves it, and even if she didn’t, I’d bribe the crap out of her with popcorn. We’re good bahaha.

Anyway, colorful, heartwarming, musical, and vibrant, this is another wonderful adaptation.

I LOVE THEM ALL AHAHAHAHA

One reply on “A Christmas Carol: Films VS. Book”