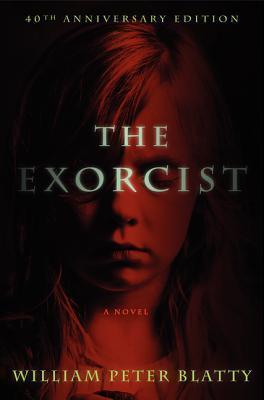 Four decades after it first shook the nation, then the world, William Peter Blatty’s thrilling masterwork of faith and demonic possession returns in an even more powerful form. Raw and profane, shocking and blood-chilling, it remains a modern parable of good and evil and perhaps the most terrifying novel ever written.

I was finally prepared to read this after seeing the movie for the first time last year. I just needed to be in my 30s to handle it apparently, so I figured, why not try the book too?

I tend to go in with the mindset that in a way the book will be scarier, it’ll make details to make your hairs stand on end and it did indeed do just that lol.

I was pleased to see that the script had been well adapted from the book, and was pretty happy with the differences that did occur.

I loved that in this book we got to know so much more about the backgrounds of the main players in this dark ‘game’ and that we get to start off with more knowledge about where this dark force may have come from, and the brevity of its intentions. (..Idk why I write long sentences, I’m so sorry)

The book was creepy in a different way than the movie, Blatty did a great job giving the reader chills, the slow tense build up into the evil he creates and the medium it uses to unleash its evil ways. This also made you really ponder on the boundaries of good and evil, on what the possibility of faith (not necessarily religious faith) could do and it can be viewed as a glass half empty or a glass half full sort of story.

And though you don’t have to be religious or anti religious to enjoy it, I did like the deep look at the religious faith concerning the priests/fathers. You can see what sort of strain they can be under and I was fascinated by the psychologist priest and his faith as well.

Was this gory? In some ways, yes, it was violent and detailed in the gruesome scenes and the scariness was actually not in those details, those were shocks to the system of course, but the fear came from the unseen. What I couldn’t see when I read was much more terrifying.

It’s also not every day I read a book with black mass and darker occult references! I was super intrigued by the black mass parts and the implications it had on the rest of the book.

Overall, it was an expectedly great read, I give it a 5/5 for being a perfect horror read for me. Now onto the movie.

Seeing the movie for the first time, I’m so glad I waited because I would have been scared senseless watching it even say like 5 years ago, I don’t handle horror movies well but this isn’t like today’s where it’s all gore and jump scares, this was such a built up sense of dread and foreboding.

Unlike the book, this doesn’t settle on the sense of mystery, of everyone figuring out who is desecrating church altars and how the movie director died. No, this gives you a clear definition that whatever flashes of events are occurring through one medium.

Whatever is inhabiting the girl.

While the book gives you the backgrounds of the priests and detective, this is more focused on building up the set up for the terror of the possession and exorcism. Still gruesome and gory in its own ways, it gives you a bit of an extra shock factor the book may not with its scary visuals.

The possession was definitely terrifying lol, that little girl will haunt my dreams, in fact last night I got up to go to the bathroom, saw a white shirt hanging up and shrieked thinking it was the girl lol, I do indeed scare easily.

The resolution is much the same, and I was really happy with again how well the script was adapted for the big screen. Overall, I really loved the movie equally and I can see why they cut stuff out, it would have been too long in the end.

Both Equally Terrifying! Huzzah! *Goes to grab teddy bear and hide under covers*

5 replies on “The Exorcist: Film VS. Book”

great reviews and comparison. you are definitely more brave than i. huzzahs indeed–kudos, even.

I can’t believe you only now watched this movie lol. I am pretty sure this is the first horror movie I ever watched and I was under the age of 10 haha. I haven’t ever read the book though, so I am excited to hear you enjoyed it so much1

I legit still have nightmares about the Chucky movie, I am a weak little flower lolol I am so impressed, omg, you were a fearless child!!