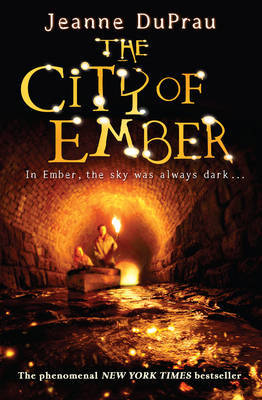 Many hundreds of years ago, the city of Ember was created by the Builders to contain everything needed for human survival. It worked – but now the storerooms are almost out of food, crops are blighted, corruption is spreading through the city and worst of all – the lights are failing. Soon Ember could be engulfed by darkness-But when two children, Lina and Doon, discover fragments of an ancient parchment, they begin to wonder if there could be a way out of Ember. Can they decipher the words from long ago and find a new future for everyone? Will the people of Ember listen to them?

The idea of this for a dystopia was pretty dope if you ask me! I know, I know you all are stunned by my eloquence! But seriously, I thought it was quite creative and the sort of perfect setting to use not just for dystopia but for also for Middle Grade readers.

Though I thought the premise was awesome, I did have some issues.

I found it so hard to believe that there were no books from the past saved. Who thought it would be a good idea to not have any books on say engineering or cooking or idk…manuals for generators. I get it, the builders didn’t want this to be a permanent solution but what if something happened to the generator before they’d planned? While that made zero sense to me I still really enjoyed the underground world of Ember.

The city is quite fleshed out and the map and descriptions left me quite pleased. You were transported to Ember.

The characters weren’t really fleshed out, but, they weren’t as 2D as I thought. They were just…there? It was like they were being set up for the other books and really towards the last couple of chapters I started to make this tentative connection with them as they went off on their adventure.

Hated the mayor, was just ready to slam his face into a shaving foam pie.

I’m not sure yet if I’ll read the other books but I’m not so put off that I wouldn’t, I’m just not sure I need more than the ending that was given. I mean, I survived the ending of The Giver, I think I can handle this.

I’m passing it onto the spawn to read now and I hope she’ll enjoy it!

3.5 cups of coffee from me, not too shabby! But now onto the film! 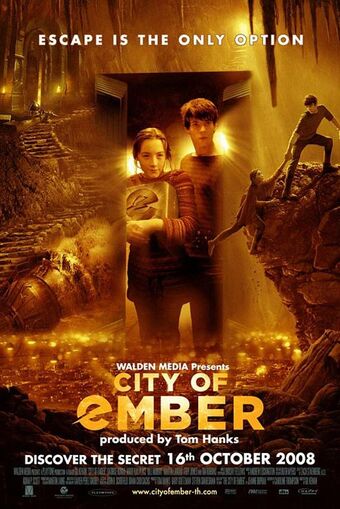 This is yet another case of me watching the movie first, I completely had no memory of it because I definitely remembered even the wrong casting, so, there’s that.

I just rewatched it when I realized I didn’t remember much of it as it came out in 2008 and I was a little pleasantly surprised and as exasperated as I thought I was going to be.

For starters I was actually happy they aged up the kids, if only because of Lizzie and Looper of nothing else. They did a great job setting the scene for the city but they left out any exploration of it that we got to see through the character, so they gave you a cool city and didn’t let you look at it lol.

There were parts that were weirder, and I’m not really going to discuss all the differences though I’ll list them but I did like the pacing of it. It fit the movie better than the book’s pacing would have and they made a few good changes and a few bad ones lol.

The builders had more of a presence and I liked that they explained a few things early on with the movie’s intro as it was something that kept me confused until the book finally explained it lol.

Overall it was really nothing special but it was something that kept well enough to the book that I wasn’t raging over everything and I thought that it made a good transition to screen. I mean, really, can anything really be bad when compared to Eragon’s film?

I still don’t understand why they would keep every single thing hidden about the world above when a generator manual and freakin batteries would have made their lives so much easier.

The book is definitely better, but the movie was still fun!

One reply on “The City of Ember: Film VS. Book”