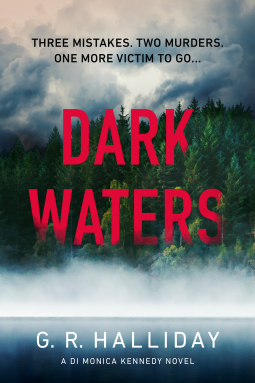 The haunting new novel from G. R. Halliday, author of FROM THE SHADOWS, shortlisted for THE MCILVANNEY DEBUT PRIZE

Annabelle loves to drive. It helps her escape her world, her past. Speeding on a mountain road in the Scottish Highlands, she sees a little girl step out in front of her. She swerves to avoid her. The next thing Annabelle remembers is waking up in a dark, damp room. A voice from the corner of the room says ‘The Doctor will see you now’.

Scott is camping in the woodlands in the Scottish Highlands – but in the middle of the night, he hears something outside his tent. When he goes out to have a look, a little girl is standing among the trees, staring right at him. Scott is never seen again.

When a dismembered body is discovered, DI Monica Kennedy gets called to the scene immediately. After six months away from the Serious Crimes team, they need her back on board.

As Monica searches for the murderer, another body is found. Monica knows the signs . . . She’s on the hunt for a serial killer.

**Here’s my review for the first book!**

This was even creepier than the first book, which means it was an automatic amazing read for me.

DI Monica Kennedy is back, after taking six months of ‘normal’ work, needing the break from her last case. She’s spent more time with her daughter Lucy and tried to push the events of the horrific investigation out of her mind.

Unfortunately, there’s a mysterious dead body and her boss needs Kennedy back on the case.

I really enjoyed seeing Kennedy in her element as DI again and was surprised by how happy I was that she still had Crawford as her partner.

She wasn’t the only one having a rough time though and it appears Fisher is going through some things as well. With everyone dealing with their personal lives in the background, the case takes precedence. There’s another body, there’s something fishy about it all and Kennedy senses that things are more connected than they appear.

I loved that this was another dark and gritty Scottish Highlands crime noir. Halliday has it down to a science already after only two books. There’s such a creeping darkness and an almost supernatural element to it that my dark heart was leaping with joy.

Halliday’s writing style makes the chapters fly by and soon you’re reading this book at 3:30AM and needing to know how it all ends.

There have been two bodies, but there are more victims, and as they find out that this one is connected to them in a way never expected, Kennedy takes on the clock to try and save the latest victim.

Absolutely loved Kennedy’s resolve and her inner reflections on her past as she deals with the case.

This was better than the first book, but after watching Deliverance and then reading this, I think I’ll be staying far away from remote areas.

You also may want to keep a light on to fall asleep with after reading this in the dead of night lol.

4.5/5 cups of coffee from me, thank you to Vintage and NetGalley for an eARC in exchange for my honest opinion as part of this tour!