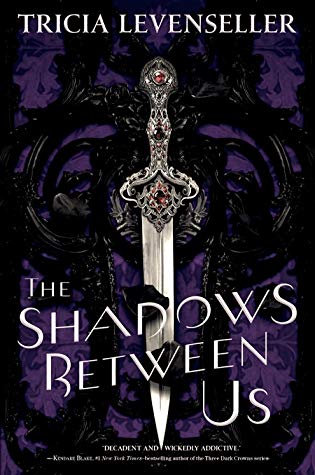 Alessandra is tired of being overlooked, but she has a plan to gain power:

No one knows the extent of the freshly crowned Shadow King’s power. Some say he can command the shadows that swirl around him to do his bidding. Others say they speak to him, whispering the thoughts of his enemies. Regardless, Alessandra knows what she deserves, and she’s going to do everything within her power to get it.

But Alessandra’s not the only one trying to kill the king. As attempts on his life are made, she finds herself trying to keep him alive long enough for him to make her his queen—all while struggling not to lose her heart. After all, who better for a Shadow King than a cunning, villainous queen?

This was the ultimate, perfect, most amazing ‘Slytherin’ romance I have ever read.

I’ve finally read a book by Tricia Levenseller despite basically owning every book she’s written. [Are you even a bookworm if you don’t own shelves of books you haven’t read and still buy more? The answer is yes, but teach me your ways sorcerer/sorceress if this is your case.]

Alessandra was perfect for being a little black-hearted power-seeking woman. She was Fierce with a capital F. She also was so cunning that I just wanted to declare myself into her service while reading lol.

On the flip side, we have the Shadow King who is a curiosity wrapped in darkness and, well, shadow. He was really intriguing and I loved his abilities and the magic system behind it. Colour me impressed and a little in love with him and Alessandra.

Remember, this is not a NICE couple, the Shadow King rules with an iron fist, not much mercy behind him or his court and Alessandra is no better if anything she may even be harsher.

When it comes to their interactions, the chemistry is INTENSE. I loved the ways the Shadow King showed he cared for Alessandra to keep up appearances, you’ll see what I mean if you haven’t read it but do, and the ways that they grow their actual relationship just suited them so perfectly.

Alessandra’s family is a sore point for the dark-hearted woman, her sister is one who may seem to be ‘in the light’ but she is really just as bad as her sister if not worse because at least Alessandra doesn’t pretend to herself that she’s ‘good.’ Her father has only one concern, money, and the way Alessandra deals with him is awesome.

Not to mention all the while juggling her family and plotting, Alessandra has a secret she has to keep a tight hold of.

The twists were not hard to spot but they were still enjoyable, and for me, I enjoyed the description of clothes so much lol, I envied Alessandra her wardrobe. I loved the worldbuilding though it was a small part of the focus, this is a story set mostly in a castle and very rarely is the world outside of it important, and rarely is the story outside of it.

So keep that in mind, this is a romance, it’s a castle set one, and it’s dark and grim and I LOVED IT.

Alright, 5/5 cups of coffee from me, if you’re a fan of darkness and romance, you’ll enjoy this. [Keep in mind it can get a bit steamy ;)]

4 replies on “The Shadows Between Us Review”

LOOOOOOVED THIS BOOK TOO! Great review! I love Levenseller’s writing.

Woah a 5/5 rating?? I’m so happy you enjoyed this one! I’ve heard nothing but great things about this book so I bought it for myself on Kindle and of course, I still haven’t gotten around to reading it haha. Great review! 💓