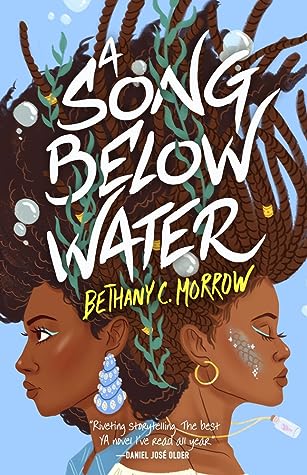 Legacies meets Nic Stone’s Dear Martin in Bethany C. Morrow’s debut YA, A Song Below Water, about two best friends discovering their magical identities against the challenges of today’s racism and sexism.

Tavia is already at odds with the world, forced to keep her siren identity under wraps in a society that wants to keep her kind under lock and key. Nevermind she’s also stuck in Portland, Oregon, a city with only a handful of black folk and even fewer of those with magical powers. At least she has her bestie Effie by her side as they tackle high school drama, family secrets, and unrequited crushes.

But everything changes in the aftermath of a siren murder trial that rocks the nation; the girls’ favorite Internet fashion icon reveals she’s also a siren, and the news rips through their community. Tensions escalate when Effie starts being haunted by demons from her past, and Tavia accidentally lets out her magical voice during a police stop. No secret seems safe anymore—soon Portland won’t be either.

“I love this book so, so much! Bethany C. Morrow delivers a blistering modern classic with this gorgeous tale of friendship and power. A Song Below Water somehow manages to be intensely happy and sad at the same time and all in the balance of great, riveting storytelling. The best YA novel I’ve read all year.” — Daniel José Older, New York Times bestselling author of Shadowshaper

This is an amazing urban fantasy where Morrow has used creatures and beings of mythos while creatively making them her own. The magical beings are used to not replace or metaphor the social injustices, but, to highlight them even more.

Sirens are always black girls, but not all black girls are sirens, they are profiled, and they are not seen as victims. It starts with the death of Rhoda Taylor, a black woman who was killed by her boyfriend, but then rumours swirl, was she a siren? Suddenly her death seems…acceptable, her boyfriend is even seen as the victim and sirens are under even more scrutiny.

Under all this scrutiny and fear, Tavia, a teen siren, is under pressure and scrutiny of her own, but still, the surprises keep coming. This includes Tavia’s favourite YouTuber coming out as a Siren.

Watching Tavia grow, seeing how she struggles with her family, all of it truly endeared her to me, and I can only imagine how others may connect with her as well, the same goes for Effie. Effie’s trials and challenges are different but in some ways the girls both have similar family issues, having to fight against those who in their love are overprotective and make decisions that the girls don’t agree with.

Morrow seriously blew this out of the water, the girls are sisters in every way that matters, their families try to protect them with the fear that only parents who face the brutal realities of losing their children due to simply who they are [whether the colour of their skin or for being a siren or magical being].

The fact that she set this in Portland was probably another reason this book was a five-star read. When Morrow spoke of its setting during the YallFest [Stay at Home edition!] panel, she said she picked Portland because it was already such a different place, it was easy to add magic. And that’s true, I mean, their slogan is ‘Keep Portland Weird,’ but she also mentioned it’s a place where they may like to see themselves as ‘better’ or having a more open mind when it comes to certain citizens of Portland.

You do not have to be from the deep south to have a prejudice, and Morrow highlights that.

There’s one scene where Tavia gets pulled over by the police, she’s in her Dad’s nice car, she’s going the speed limit, in basically her own neighbourhood.

She got pulled over because she was black, but for Tavia the fear of getting pulled over is even worse, she’s a Siren, if they figure that out on a routine racist traffic stop, her whole world could be unravelled.

Tavia has had to live in this shroud of silence, learning ASL for when her powers get to be too much, her sister [play/pretend sister as they refer to each other] interprets for her, giving her a voice when she cannot use her own.

The bond between the girls is amazing. Effie may not be a siren, but, there’s something changing in her, she’s connected to magic in her own way through a tragedy, but it seems to be more than that and we see Tavia and Effie protect each other with all the fierceness that family tends to.

The changes in Effie are hard not to fixate on, trying to figure out what she could be, what her past hides, it’s all really intense as we get down to the last third of the book and I couldn’t put it down.

Morrow owns her own mythos, using stuff we’ve heard about creatures and beings, making them not only just her own but using those mythoi to her advantage, either from making some things true or making them sometimes the only thing known about beings who don’t appear often int his magical world.

I know this is a really disjointed review and I’m so sorry, but I was overwhelmed with how much I enjoyed this and how much I want to shout out about it.

I would highly recommend this book to any urban fantasy fan who is ready to have a more creative look at sirens. Thank you to NetGalley and the Publisher for an eARC in exchange for my honest review.

This book will be on my 2020 books to promote list, so, I’ll try and see if I can’t come up with a few extra things to do!

Want to read an Excerpt?

If you go to her website there’s an ‘excerpt button’ which takes you to Bustle’s preview of the first chapter! Also, I’ve included the link.

A somewhat-recovering expat living in the American Northeast (with one foot still firmly planted in Quebec), Bethany C Morrow writes speculative fiction for both the adult and the young adult market.

Her adult debut, MEM, was an ABA 2018 Indies Introduce pick, and a June Indie Next pick, and was featured/reviewed in: Locus Magazine, the LA Times, Buzzfeed, Book Riot, Bustle, and Tor.com, among others.

She was editor and contributor to TAKE THE MIC: Fictional Stories of Everyday Resistance, which released with AAL/Scholastic in October 2019.

Bethany’s YA debut, A SONG BELOW WATER is a contemporary fantasy, and releases in June 2020.

5 replies on “A Song Below Water eARC Review”

I just read an entirely different review about this earlier so let’s just say I’m definitely interested, especially where you mentioned the other creatures are used as a metaphor for racial injustices. I really love the concept of this, though, and will likely be looking out for more reviews or snagging a copy myself.

I feel like I could understand some reviews I read where they talked about how they didn’t know what the mythical creatures were at all sometimes, but, I feel like it was done on purpose, and I super loved this

[…] The Caffeinated Reader – A Song Below Water eARC Review […]