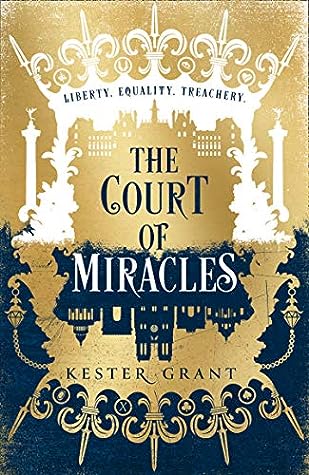 1828 and the citizens of Paris still mourn in the wake of their failed revolution. Among them, in the dark alleys and crumbling cathedrals of the city, the most wretched have gathered into guilds of thieves, assassins – and worse. Together they are known as The Court of Miracles.

Eponine has lost more than most. When her father, Thénardier, sells her sister to the Guild of Flesh she makes a promise to do anything she can to get her sister back, even if that means joining the Court of Miracles, the very people keeping her sister a slave.

Eponine becomes perhaps the greatest thief the Court has ever known, finding a place among them and gaining another sister, Cosette. But she has never forgotten the promise she made, and if she’s to have any hope of saving one sister, she will have to betray the other.

This beautiful reimagining of Les Misérables tells the stories of your favourite characters and what might have happened if the French Revolution had not come to pass.

To start this off, Eponine has always been my favorite character in Les Mis the book and the musical, so, I am biased. I have no shame in admitting this.

It’s not to say there are no other good characters within the original work or musical, but, there’s a soft spot for the underdog who defies her expectations. That. And. Cosette is so boring to me. I love her songs in the musical and think she’s such a cute little child in the book, but holy cow if there’s a person who could bore me to tears. It’s her.

Not only does Kester Grant give us all the Eponine story we deserve, but she also makes Cosette so much more likeable and interesting. 10/10 For that.

Grant draws inspiration not only from Les Mis but from the Jungle Book as well, Eponine is not just, well, Eponine, she’s Mowgli in a way, taken in by a pack of wolves, or in this case, a guild of thieves, and makes an enemy of a Tiger.

Lord Kaplan is a terrifying villain, not because he’s just plain ol’ ‘scary’ but because he takes away the free will of those who are under his ‘care,’ he turned a whole group of able-bodied people into dependent ‘zombies’ of a sort. Utterly terrifying.

Unfortunately for Nina (Eponine), Lord Kaplan’s guild includes her older sister, and so she’ll stop at nothing to get her sister back.

What I loved most is that despite all of Nina’s fire and passion, her determination to get her sister back does not undermine the humanity that Grant builds up in her and, ugh, I love that.

Eponine’s sass and slaps are all I ever need in a book to get me to love it, but Grant gives us a complex underworld of guilds who are made of the unwanted and unseen. I had such Hunchback Court of Miracle vibes when she first drops us into her underworld.

The pacing is decent, I thought it worked well for the end game of this book that Grant was pointing us towards, and I really loved seeing so many characters, she gives us a full-fleshed out cast of secondary characters and I’m all there for it.

The characters are all a variety of backgrounds, diverse, and well rounded. I cannot compliment Grant enough on all the characters she gives us….now…gimme more Valjean.

The setting is perfection, failed revolution, nobility winning, it’s almost a historical dystopia in that sense lol. Also, Paris doesn’t feel like Paris, she’s a new creation and character of her own, a city who sees everything that goes on its depths and demands sacrifices of those that call her home.

This is a fantastic debut novel, I realize that my review is very rambly and I’m sorry. Basically, if you like Les Mis, if you love Eponine, I would recommend this book to you. Thanks so much to Kester Grant and the Guild of Thieves for an eARC of this in exchange for my honest opinion.

Kester Grant is a British-Mauritian writer of color. She was born in London, grew up between the UK, Democratic Republic of Congo, and the tropical island paradise of Mauritius. As a wanton nomad she and her husband are unsure which country they currently reside in but they can generally be found surrounded by their fiendish pack of cats and dogs.

3 replies on “The Court of Miracles eARC Review”

OMG yes, I love Eponine and I have no shame admitting this also I’ve ALWAYS been curious with her in the musical. Cossette was well. I forgot her relevance other than being pretty and winning over the male love interest Eponine was also in love with. I’m really glad to hear she’s more interesting and more likeable in The Court of Miracles though! Bless that happening.

(Sounds like Lord Kaplan can go choke on a sharp pineapple though.)

[…] down for you all. I just love to thank my memory to be relative fresh, and reading it with Haley @The Caffeinated Reader helped a great […]