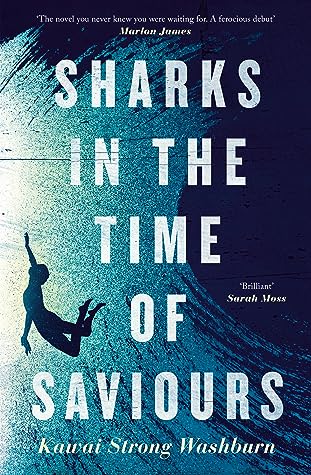 In 1994 Kailua-Kona, Hawai’i, on a rare family vacation, seven-year-old Nainoa Flores falls off the side of a cruise ship. When a shiver of sharks appears in the water, everyone aboard fears for the worst. But Nainoa is gingerly delivered to his mother in the jaws of a shark, marking his story as the stuff of legends.

Nainoa’s family, struggling amidst the collapse of the sugar-cane industry, hails his rescue as a sign of favor from ancient Hawai’ian gods—a belief that appears validated when he exhibits puzzling new abilities. But as time passes, this supposed divine favor begins to drive the family apart: Nainoa, working now as a paramedic in gritty Oregon neighborhoods, struggles to fathom the full measure of his expanding abilities; further north, in Washington, his older brother Dean hurtles into the world of elite college athletics, obsessed with wealth and fame; while in California, risk-addicted younger sister Kaui navigates unforgiving academic and wilderness landscapes to forge her independence from the family’s legacy. When supernatural events revisit their home in Hawai’i—with tragic consequences—they’re all forced to reckon with the bonds of family, the meaning of heritage, and what it takes to survive.

A depiction of working-class native life in the island paradise of the American imagination, Sharks in the Time of Saviors is an arresting meditation on family, exile, and the devastating search for salvation that examines what it means to be both of a place and a stranger within it.

There are books that come about, they quietly slip under your skin and change your world. No explosion of fireworks, no earth-shattering break out of the cage epicness, just a feeling that you’ve been changed.

Sharks in the Time of Saviours did that for me, in fact, it affected me so much that I had to take a while to gather my thoughts before I could write a review.

This is a book about a family, about culture, and native life clashing against the change of paradise tourism.

Washburn has fantastically lyrical and gorgeous prose. The sort of writing that is timeless, he could have written this ten years ago or two years from now. The style is unique and stands out, each voice of the narrative distinct and different but cohesively put together to bring you a unique story.

The emotions I felt while reading this were so varied and yet all of them ‘heavy-hitting’ each making its mark on me from joy to relief, to sorrow.

You may think that Nainoa was the main character but instead, he seemed to be the underlying unity of the family, whether through his ‘miracles’ or through other events that cause the family to come together in their own way. I loved the sibling relationships between Nainoa, Kaui, and Dean. Each has their own view of home, and each has their own story of going to the mainland to escape a fate of poverty that many others seemed to face in Hawai’i.

But I think the real message of this was finding your home, of coming back in some cases or making your own. Nainoa tried to escape Hawai’i, thinking his gift needed to be cultivated afar, Kaui wanted to escape the notoriety of her brothers and to make her own mark, and Dean thought he could deliver the family from the jaws of ever-looming poverty and render himself important to them all, all through his love of basketball.

Washburn also gives us such an in-depth look of the parents, their relationship with the children, Hawai’i, and each other. Seriously, the most emotional parts of the story for me were with Augie, the father. Though the mother is definitely a driving influence in this writing. She is swayed by their history, their culture and gods, and she realizes in the end that, believing wasn’t the issue, but, maybe she was believing in only one person when it should have been three.

Kaui definitely had the most development as a character and in the end, she wasn’t my favourite but she was the one I felt a deep connection to.

This is a deep look at the life of a Native Hawaiian family with their faith tested in the land and each other.

This is a gorgeous work, it’s truly a masterpiece for 2020 and is one of my ‘keep an eye out for’ novels as I think it could really make its mark on the book world.

Thanks so much to Canongate for an ARC of this in exchange for my honest opinion.