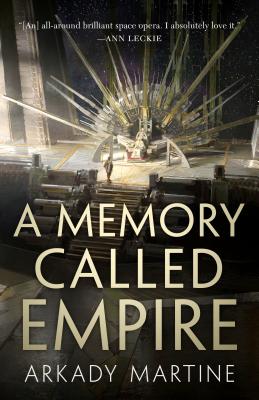 Ambassador Mahit Dzmare arrives in the center of the multi-system Teixcalaanli Empire only to discover that her predecessor, the previous ambassador from their small but fiercely independent mining Station, has died. But no one will admit that his death wasn’t an accident–or that Mahit might be next to die, during a time of political instability in the highest echelons of the imperial court.

Now, Mahit must discover who is behind the murder, rescue herself, and save her Station from Teixcalaan’s unceasing expansion–all while navigating an alien culture that is all too seductive, engaging in intrigues of her own, and hiding a deadly technological secret–one that might spell the end of her Station and her way of life–or rescue it from annihilation.

I picked this book to be my slow read, and I am SO GLAD I did. I got to slowly drink in this amazing epic scifi.

Martine produces this lush world that tops any other scifi setting I’ve seen [aside from Alien Chronicles]. We have a vibrant culture in the Teixcalaan and their conquering empire, and then there are those who are absorbed into this empire, whether they like it or not, and then there is Lsel station. Mahit is the new ambassador of Lsel station, but she’s only the new ambassador because the previous ambassador has died.

Mahit arrives to find that this death was under suspicious circumstances and in her quest for the truth she may be placing herself in mortal peril.

The differences between Mahit’s own culture and that of Texicalaan is such a stark contrast, that you are automatically drawn to Mahit’s plight, she’s enthralled by this culture that has been a thing of dreams while realizing there may be to her own culture that she’s never considered.

I mean, I didn’t say this in my GoodReads review, but, guys, this is a freakin Aztec based culture, they are Conquerors, their language is complex, there is verse which is basically as important as life, it’s how they speak, with a poetic justice to everything. And not to mention their poems are epic Illiad worthy sagas.

There is also amazing technology.

Martine gives you not only great world-building, but the culture encompasses language, clothing [and hair] style, transportation, food, and every beautiful detail. All of the Teixcalaan culture made this detail-oriented heart so very freakin happy.

Watching Mahit navigate this world without her Imago [a memory from her predecessor which integrates with her] who is supposed to be there to help her, well, it’s fascinating and just pure amazement.

Thanks to TOR for a copy of this in exchange for my honest review! 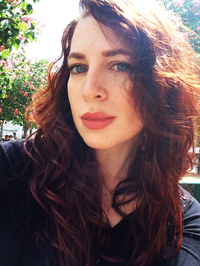 Hi. I’m Arkady, I write speculative fiction when I’m not writing Byzantine & Armenian academic history or planning cities, I (currently) live in Baltimore with my wife Vivian Shaw — it’s weird having a fixed address, but I’ve got one now, and I rather like it — and I have just sold my first novel, along with its sequel, to Tor Books, where Devi Pillai will be my editor.