SO I don’t get to go to a ton of events, well, almost none, like I was so disappointed to not be able to go to ‘The Island Child’ event at the Portobello Bookshop last night, I had a ticket, but, I ended up not being able to go, that’s because I live a bit of a distance away from Edinburgh, and it’s not so much the distance but the fact that I can’t get trains until after a certain time which means I miss a lot. So. Boo, but, enough of that negative talk because I DID get to go to an event last month and I am so excited that I did!!!

Penguin Huddle KNOCKED this out of the park! It was a great event, we got to meet with authors, publishers, booksellers, bookshops, and other bloggers. In fact, I got to meet a couple that I knew from online and they were amazing company and so kind to me lol, Kelly and Joanne [Who both did fantastic posts covering this event as well]

I’ll start off with sharing pictures of the event, we got to mingle have some canapes and drinks beforehand, and I got to talk to some great people. I also got to dress up, like, who am I? What is this life?

#Cornerstone2020 Edinburgh – Here is the lovely @AbbieGreaves1 with @portybelle & @DramaHuman31

A highlight of the wonderful event was getting our books signed and talking with the authors.

Abbie, you were so kind, it was a real honour to meet you. @arrowpublishing @EmGriffs pic.twitter.com/ePLmkFSnvo

Kelly got some great pictures, loved seeing them all, but I am partial to the picture she took of her and me. Also, she got one with Joanne and I talking to Abbie Greaves, yay for new bookish friends!!!

The Venue is also a great one, I loved the room, it was a bit of a tight squeeze after we all started mingling after the talks, but you couldn’t be that ambience!!

LOOK AT THIS TABLE OF PROOFS!!

A Glorious sight to behold lol and I know my pictures are crappy quality but I just don’t have the energy to tidy them up, but Kelly’s got some great ones on her Instagram!

Don’t mind me, just drinking and holding a gorgeous proof

^^Neil Blackmore there in that tiny corner^^

The First author up was Neil Blackmore, talking about his book The Intoxicating Mr Lavelle he’s also the only author I was able to get a picture of because he was tall enough for my phone to grab a snapshot of him as I held it above my head. He described his book as ‘sexy and homosexual’ this is definitely a book for fans of The Talented Mr Ripley

‘Your brother takes me for a barbarian, Mr Bowen. But I assure you, I’m quite well trained.’

When Benjamin and Edgar Bowen embark on a Grand Tour of Europe, they are ready to meet People of Quality. They have trunks full of powdered silver wigs and matching suits, a hunger to experience the architectural wonders of Ancient Rome and an ability to quote Voltaire (at length). They will make connections and establish themselves in high society, just as their mother has planned.

But it soon becomes apparent that their outfits are not quite the right shade of grey, their smiles are too ready, their appreciation of the arts ridiculous. Class, they learn, is not something that can be studied.

Benjamin’s true education begins when he meets Horace Lavelle. Beautiful, charismatic, seductive, Lavelle delights in skewering the pretensions and prejudices of their milieu. He consumes Benjamin’s every thought.

Love can transform a person. Can it save them?

Next Author! Beth Cartwright, talking about her book Feathertide she talked about how this book was about love, including self-love which I think is always such an important thing to include in books when possible. This is a novel that took over ten years to write but it’s ready for the world now and I can’t wait to read it soon!

One girl was born to be different…

Marea was born to be different – a girl born covered in the feathers of a bird, and kept hidden in a crumbling house full of secrets. When her new tutor, the Professor, arrives with his books, maps and magical stories, he reveals a world waiting outside the window and her curiosity is woken. Caught in the desire to discover her identity and find out why she has feathers fluttering down her back like golden thistledown, she leaves everything she has ever known and goes in search of the father she has never met.

This hunt leads her to the City of Murmurs, a place of mermaids and mystery, where jars of swirling mist are carried through the streets by the broken-hearted. It is here that she learns about love, identity and how to accept being that little bit different.

Feathertide is an enchanting, magical novel perfect for fans of Erin Morgenstern’s The Night Circus and Katherine Arden’s The Bear and the Nightingale.

Jenni Fagan was up after Beth Cartwright, and she was talking about her June releasing novel, Luckenbooth which is set over 100 years, based in Scotland. This starts off about the daughter of the devil who curses a building, and then we get to watch how that curse progresses! She claims she’ll ‘never be crazy enough to write a book like this again’ Right now it’s untitled on GoodReads but if you’re curious here is the link for it.

After Jenni, we had Abbie Greaves, I talked to her the most and really enjoyed our chat, she is a terrific person and her book sounds amazing, I had to resist jumping into it right away as I had and still have, so many February books to get read. She talked about her book The Silent Treatment. There was a six-way auction for this book, and it’s shaping up to be one of the debut novels to watch for, for 2020! This is about a couple married for 40 years but having a silence of six months, and she had started writing it during her commute to work; inspired by a story of a Japanese couple whom their son has never seen speak! 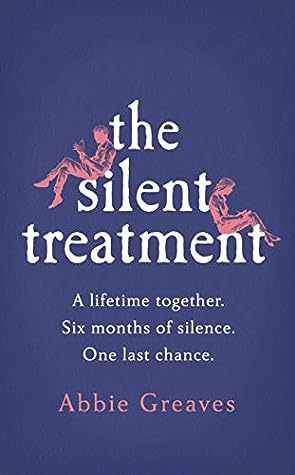 Frank hasn’t spoken to his wife Maggie for six months.

For weeks they have lived under the same roof, slept in the same bed and eaten at the same table – all without words.

Maggie has plenty of ideas as to why her husband has gone quiet.

But it will take another heartbreaking turn of events before Frank finally starts to unravel the secrets that have silenced him.

Is this where their story ends?
Or is it where it begins?

‘An original and moving debut from a talented new voice.’ SANTA MONTEFIORE

‘This moving debut unpicks the secret selves of Maggie and Frank to reveal the tragic miscommunications of their broken family. It’s a pleasure to read such a stylish and confident new voice’ LOUISE CANDLISH, author of Our House

‘Such stunning prose, and such insight for a debut author… I was bowled over by Abbie’s writing.’ CLARE MACKINTOSH

‘An unforgettable love story with a mystery that had me captivated until the last, heart-wrenching page. It deserves to be huge’ CATHERINE ISAAC, author of You Me Everything

‘The premise alone had me, but the book itself is just heartrendingly lovely. It’s beautiful, so moving and clever. I truly adored it.’ JOSIE SILVER, author of One Day in December

‘A tender, heartfelt portrayal of a long marriage with all its secrets. Cleverly structured and beautifully written, this novel celebrates love, hope – and the importance of finding the right words.’ LUCY DIAMOND

‘In her tremendously moving debut, a novel that pulses with emotional tension, Abbie Greaves masterfully unpicks a history of ordinary lives facing extraordinary challenges. I found it impossible to look away from the relationship at the heart of this novel.’ GILLY MACMILLAN, author of The Nanny

Our last author of the evening was Nick Pettigrew with his book Anti-Social: The Secret Diary of an Anti-Social Behaviour Officer. This is based on his experiences from his job, well, as an Anti-Social Behaviour Officer and to be fair it really sounds brilliant. He’s no stranger to the spotlight either, having participated in Fringe and now he’s using his job experiences to make us laugh and to convey stories of the people that have fallen through the cracks of society.

Perfect for fans of This is Going to Hurt by Adam Kay and The Secret Barrister.

Has your life become unbearable because the person living above you has a fondness for crack cocaine, the company of strangers and dance music? Or maybe you find being racially abused every day by your neighbour rather bothersome. Evidence tends to suggest it can grate after a while.

Or maybe you’re a social worker, mental health nurse, police officer, firefighter, dog warden or vicar and you’ve been landed with someone who’s a pain in the arse. Who are you going to call? That would be me, or at least somebody like me: an anti-social behaviour officer.

Anti-Social is the diary of a council worker whose job is to keep his community happy, or at least away from each other’s throats. That’s hard enough at the best of times but when government cuts mean that hospitals, social services and police are all at breaking point, the possibility of complete chaos is never far away.

This is an urgent, timely but, most of all, hysterically funny diary of a life spent working with the people society wants to forget and the problems that nobody else can resolve. This book will make you laugh, cry and boil with rage within a single sentence.

Now for pictures of the swag I scored!!

And there we have it! #CornerStone2020 was a huge success!!

It was a great night and lovely to meet you!

This looks like such a great event, congrats on being able to go & I’m glad you had a lovely time! xo