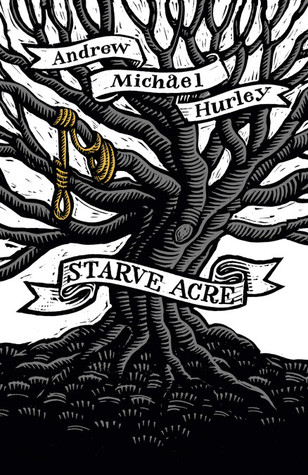 The worst thing possible has happened. Richard and Juliette Willoughby’s son, Ewan, has died suddenly at the age of five. Starve Acre, their house by the moors, was to be full of life, but is now a haunted place.

Juliette, convinced Ewan still lives there in some form, seeks the help of the Beacons, a seemingly benevolent group of occultists. Richard, to try and keep the boy out of his mind, has turned his attention to the field opposite the house, where he patiently digs the barren dirt in search of a legendary oak tree.

Starve Acre is a devastating new novel by the author of the prize-winning bestseller The Loney. It is a novel about the way in which grief splits the world in two and how, in searching for hope, we can so easily unearth horror.

I’m only about 10% in, just starting it this morning but it already has all my attention. There’s something so haunting in the prose that it just seems like it’s going to wrap itself quietly around me and draw me in.

Monster On The Moors is an MG-YA horror thriller that takes place in the eerie North York Moors of England. Clairvoyant Bobby Holmes, his American cousin Brenda Watson, and their friends, wise guy Stevie and Michael (who is challenged by Asperger Syndrome), are drawn into a deadly mystery. They are hunted by an ancient wolf creature controlled by evil witches of British lore. When one of their friends is captured, they must rely on the investigations of a librarian who is more than he seems, the mystical gifts of a gypsy king, a mysterious stranger at the center of it all, and their own wits in a desperate race to save their friend and come out alive.

I’ve already done a small review of this on GoodReads, I don’t know that I’ll expand upon it, it was cute, but ultimately I think didn’t live up to its potential.

I also finished reading Practical Magic so lookout for a review of that on my blog to come in the next week or so!

Life as a knight is not what Vedren Chel imagined. Bound by oath to a dead-end job in the service of a lazy step-uncle, Chel no longer dreams of glory – he dreams of going home.

When invaders throw the kingdom into turmoil, Chel finds opportunity in the chaos: if he escorts a stranded prince to safety, Chel will be released from his oath.

All he has to do is drag the brat from one side of the country to the other, through war and wilderness, chased all the way by ruthless assassins.

With killers on your trail, you need killers watching your back. You need the Black Hawk Company – mercenaries, fighters without equal, a squabbling, scrapping pack of rogues.

Prepare to join the Black Hawks.

These are both back due ARCs in need of reading and review, in fact, after I finish ‘Starve Acre’ my NG list will be down to 10, so I’m getting all excited and tingly [in an appropriate manner mind you, no dirty minds here]

I’m (still) listening to Sorcery of Thorns and I’m also reading Setting My World on Fire! I’ve finished A Madness of Sunshine and Feather! Love your list! Happy reading love 😘

I’m still reading an ARC of Tweet Cute by Emma Lord for a review tour for Wednesday Books. I’m a mood reader so I don’t really know what I’m reading next.