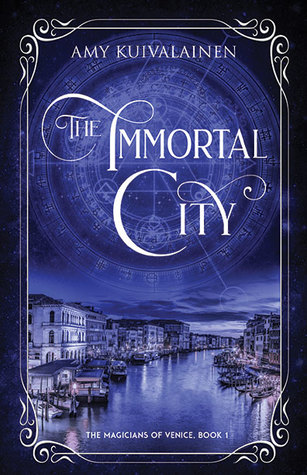 In the heart of Venice, a woman is sacrificed to a forgotten god, sparking a mystery lost for thousands of years.

Dr. Penelope Bryne is ridiculed by the academic community for her quest to find the remnants of Atlantis, but when an ancient and mysterious script is found at a murder site, she flies to Venice determined to help the police before the killer strikes again.

Penelope has spent her entire life trying to ignore the unexplainable and magical history of Atlantis, but when she meets the enigmatic Alexis Donato, everything she believes will be challenged. Little does she know, Alexis has spent the last three years doing his best to sabotage Penelope’s career so doesn’t learn the truth—Atlantis had seven magicians who survived, and who he has a duty to protect.

As Alexis draws her into the darkly, seductive world of magic and history, Penelope will have to use her heart as well as her head if she is to find the answers she seeks.

With the new MOSE system due to come online, and Carnivale exploding around them, Penelope and Alexis will have to work together to stop the killer and prevent dark magic from pulling Venice into the sea.

Hey guys, hitting you up with another book review on this lovely Saturday. If lovely for you means, cold, slightly damp, and having cleaned up a spider graveyard in the bathtub of your new house.

I was lucky enough to get to do the cover reveal for this book and now here I am reviewing it as part of the blog tour.

The synopsis really had me with Venice, but then I saw Atlantis and it was like I was 9 again looking over maps wondering where Atlantis could have been. Shhh. I was a very curious child with a love of archaeology.

So right off the bat, I wanted to read this given the premise.

Well, there wasn’t as much Venice I would have liked but there was certainly cool dark magic and occult things going on so that placated me.

As far as Atlantis content goes, well, I think/hope there’s more of it to come, it is the first book afterall and this was setting up the world and plots and so on.

I loved the Magician characters I thought they were fun and mysterious and I just wanted to go hang out in their ‘crib’ and drink wine with them.

Unfortunately, I had little love for Penelope. I think she must have been so much younger than I would have thought. This reads more as YA, though Penelope herself is old enough/brilliant enough if she’s still a teen, to have her doctorate. I think the reason I didn’t like her is that I found the romance aspect for her rather dull, but, I did enjoy her hunger for knowledge and her curiosity. I love it when characters are as big as history lovers as I am, haha.

Another Character to enjoy is Marco the inspector, he is just the best in my opinion haha.

The magic was actually very neat, and the ties with Atlantis were something I can’t wait to learn/read more about in the next book.

I mean there is little to fault with the premise and ideas, I thought they were awesome, I just found it lacking with Penelope’s character growth/development so at times it made it hard for me to love it as much as I wanted to. Still a good start to a series, enjoyable to read, and I look forward to reading book 2!

Amy Kuivalainen is a Finnish-Australian writer that is obsessed with magical wardrobes, doors, auroras and burial mounds that might offer her a way into another realm. Until then, she will write about fairy tales, monsters, magic and mythology because that’s the next best thing. She is the author of The Firebird Fairytales Trilogy and The Blood Lake Chronicles series that mash up traditional tales and mythology in new and interesting ways.

One reply on “The Immortal City – Blog Tour”

Interesting. But seems sometimes the author’s bio is as interesting as their book. Loved your prospective of the book.