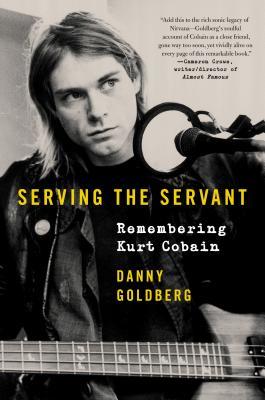 Danny Goldberg is completely unassuming and humble in his retrospective look at Kurt Cobain’s career and on their personal friendship. He doesn’t pretend to know Kurt’s relationships with others, just what he sees of them and what he’s heard, he’s so honest about his interaction with Kurt and others on his behalf and it was such an emotional read for me. As a musicology graduate I have been fascinated with Kurt’s musical imprint in a research light as well as being a huge fan and this book gave a lot of depth to the music business side of Kurt which is greatly appreciated. Overall this has been one of the best reads I’ve had so far this year and will be going on my favorites list.

Honestly, I can’t even pretend and say I’m not the tiniest bit biased of a book written about Kurt Cobain but I can say that I am unbiased when it comes to who has written it so you can be at ease knowing I didn’t just rate this five stars because it’s about Kurt Cobain.

Nirvana is just this band that if you love it, it just ist he sort of music that consumes you, there’s a raw power and edge to their music and Kurt’s own voice was always so good at conveying emotion that no matter how old I get, he and the band hold such a cherished place in my heart.

I did get emotional several times through the book this is, after all, a book that is ultimately about a man with mental health issues who ended his life, cutting off his brilliance too soon. We don’t like to talk about mental health or if some do it’s because of the power of social media and we didn’t have that when Kurt died, there were such horrible things said, just one less druggie in the world, things like that, and my god bringing that all back was part of the reason I got so easily emotional.

Pros:
– Danny manages to not speak of things he doesn’t know as if he knows them, he’ll say what he’d heard or that he didn’t know something rather than trying to fill in gaps just to make the book ‘more interesting.’
– This gave an outsider’s perspective but still someone that knew Kurt on some level
– It’s been a long time since we’ve had a fresh book on Kurt Cobain
– It’s coming out 25 years since Kurt’s death
– Danny’s voice is engaging and he doesn’t drawl or drone on where he could

Cons:
– It’ll break your heart if you’re a Nirvana fan but it’ll be like Kurt’s back again when you feel the rush of it all reading about him and Nirvana.

Harper Collins was kind enough to approve my request Edelweiss for this book and honestly, I’ll be fine if I never get approved for another book on there again after having the honor to read this. This was given in exchange for my honest review, and that’s what I’ve given you all.

Kurt has always been important in my life so I’d love to read this – it still makes me sad that we lost him so long. I don’t know if you’ve seen it but when he did the Unplugged live recording there’s a bit when he’s singing Where Did You Sleep Last Night and he looks up at the camera… His eyes are so piercing and haunted even when I remember it. Thank you for the review, I’ll definitely be getting a copy of this!

I hadn’t seen it, I only own the CD, but I’ll be going to look at it, I’m so glad to meet a fellow Kurt fan, he made such a huge difference in so many lives thorugh his music ❤

I was…13 when Kurt Cobain died and I wasn’t listening to his kind of music then, but I remember distinctly the day he died (we were off school for some reason, possibly spring break), it was all MTV reported on. I don’t have that personal connection to him or his music like you do, but I do understand how someone you don’t even know can get under your skin and give voice to your feelings as though they lodged themselves directly in your brain, so I’m so glad you were able to read this early and relive the best parts of your connection to Kurt and his music. I look forward to reading your more complete review, because even this makes me want to read the book.

Truth be told I was only nearly 6, I don’t remember realizing he had died, but I remember listening to Nirvana a lot, and then when I was older realizing the reason my sister had been so upset was that he’d died, it was my sister who used to play Nirvana for me ❤ Thanks for the lovely comment!

[…] Serving the Servant: Remembering Kurt Cobain April 2, 2019 This was one of my fave reads of 2019 so far and its book birthday is tomorrow!!!! If you’re a fan of Kurt of Cobain and Nirvana it’s worth a read even if you may not be a fan of Danny Goldberg. You can find my review linked in the title. […]