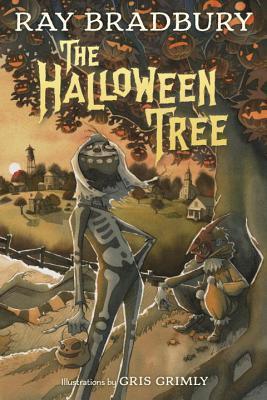 Eight costumed boys running to meet their friend Pipkin at the haunted house outside town encounter instead the huge and cadaverous Mr. Moundshroud. As Pipkin scrambles to join them, he is swept away by a dark Something, and Moundshroud leads the boys on the tail of a kite through time and space to search the past for their friend and the meaning of Halloween. After witnessing a funeral procession in ancient Egypt, cavemen discovering fire, Druid rites, the persecution of witches in the Dark Ages, and the gargoyles of Notre Dame, they catch up with the elusive Pipkin in the catacombs of Mexico, where each boy gives one year from the end of his life to save Pipkin’s.

It’s been a hot minute since I did one of these but as I just get more and more back into the swing of things, I’m really happy to do one of these just in time for my favorite time of year.

This is yet another case where I saw the movie first. The movie is also one of my favorite Halloween movies ever so this had a lot to live up to.

It didn’t quite live up to the fantastical whimsy the movie captured which Bradbury himself is the narrator of.

I loved it, it was short, enjoyable, and with a dash of whimsy. The problem is that it’s so short that it’s not that deep but it’s great for a tale. I would probably call it that, yes it’s a novella but it is more the style of a tale which is the part I did enjoy but there’s only so much depth to a tale this short. This is also almost more informative, it’s about death and how different cultures deal with it, and I point this out that it’s not about other cultures having versions of Halloween but how Halloween and its relationship with death is akin to these other cultures and their days of honoring the dead.

Bradbury has a great writing voice that I’ve always admired and I read this book every year now out of tradition and it’s a bit of a comfort read during my favorite season (autumn for the wiiiin).

Overall 4/5 it’s a good little read, has a good amount of charm and is a bit different than other Halloween reads out there.

This book basically encompasses my childhood. I can remember very clearly watching it in like third grade -and I am FAR CRY off from that, like, I am ancient now-. I loved Bradbury’s voice as the narrator, I loved watching how other cultures have celebrated/honored their dead.

In this movie instead of eight boys, there’s four boys and one girl where the book didn’t have a girl at all. Four friends are on a mission to include their usual leader of the gang in their Halloween but Pip remains elusive. The more they find out, the more important it is to find Pip.

The animation style is really lovely and it did a better job of making feel like a full tale/complete story. You get to know the characters more and you have a favorite, and there are so many more nuances by just cutting out extra characters that don’t get used.

The ending of this is much like the book, and both have a strong message about life and death and it is actually very sweet.

5/5 for The Halloween Tree film, and now, I’m off to go watch it…yet again.

Overall I would say that the movie is better this time around!

2 replies on “The Halloween Tree: Film VS. Book”

[…] September Brings all My Books to the Yard Spooky Reads and Recs 2021 The Halloween Tree: Film VS. Book 13 Days of Halloween Read This Not That GoodReads 2021 Winners Edition 12 Days […]