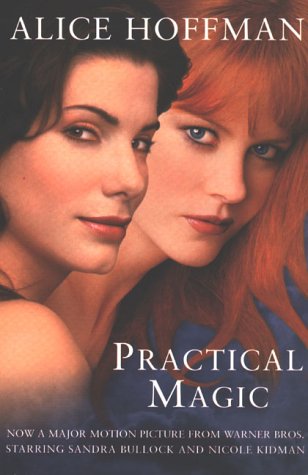 The Owens sisters confront the challenges of life and love in this bewitching novel from New York Times bestselling author Alice Hoffman.

For more than two hundred years, the Owens women have been blamed for everything that has gone wrong in their Massachusetts town. Gillian and Sally have endured that fate as well: as children, the sisters were forever outsiders, taunted, talked about, pointed at. Their elderly aunts almost seemed to encourage the whispers of witchery, with their musty house and their exotic concoctions and their crowd of black cats. But all Gillian and Sally wanted was to escape.

One will do so by marrying, the other by running away. But the bonds they share will bring them back—almost as if by magic…

I loved the spooky vibe from the very beginning of this! It was so interesting to see the differences between this and the film adaptation. While the movie was set in that gorgeous house in a small town, the book was actually set in the suburbs in Sally’s house.

That was a huge shock to me but I really enjoyed that, it gave it more of a realistic view, oh and not to mention that the sisters have a more complicated relationship. There’s a lot of hurt and resentment that built up over the years and while Gillian is home for the same reasons as in the movie, it’s not as whimsical. They’ve tried to cover their tracks, Angelov was still a horrible guy and kinda got what he deserved if you asked me.

Sally’s daughters are older and they have their own relationship that’s just as complicated as Sally and Gillian’s. And Sally’s older daughter is a bit of a meanie, but, I loved her development.

Trying to be normal is a stronger theme for Sally but let me tell you guys, seeing Gillian work in the burgershack was one of the best things ever. Real life means sometimes taking a job you may not always want, so, you know, at least that was realistic. Gillian also though deserves love and we see that she’s made a lot of mistakes in picking a partner but the book gives her a worthy love arc, and I think it was a really great relationship for her.

The ending was less bombastic but just as satisfying in my opinion and while the movie was more whimsical, this was still whimsical in its own right and maybe because it was set in the suburbs but there was a heavy magical realism vibe to it because of it.

Overall, super fun read and perfect for any spooky or witchy tbr. 4/5 cups of coffee now onto the film!!

I can’t help it, I adore this film, in fact last night I watched it with Ruby of Bookishly Ruby and we had a blast. I was so glad she watched it with me! I did like the suburbs in the book, totally different vibe but really, I love this gorgeous old house from the movies. I thought it was fantastic and I love that the Aunts are a bit more prominent to the plot in the movie.

Sally’s daughters are younger and sweeter, and a bit more of an innocent addition to the story and Sally and Gillian themselves are closer and more connected. The stress and strain from the book isn’t as consuming in the movie though they still have their problems.

Sally breaks your heart with her grief after her husband dies, and it made me realize that this is just one of the many reasons I love this film.

The setting of the house and the town were great, the creepiness of Angelov is also so well done, you’re on edge with the sisters at times as things are obviously not okay after his death, and Sally is a bit more accepting of magic in the movie.

Sally’s love interest is also very nice, and if you ask Ruby, she’ll tell you all about his amazingness. It’s truly worth asking her and hearing lol.

I guess I don’t have too much to say because it would just be stating the differences, but I LOVE this movie and it turns out, even after reading the book which was awesome, I still love the movie more.

[…] I also had a movie night with Haley and we watched Practical Magic, which is one of my absolute favorite movies ever. Head over to Haley’s blog to read her awesome book vs movie review. […]