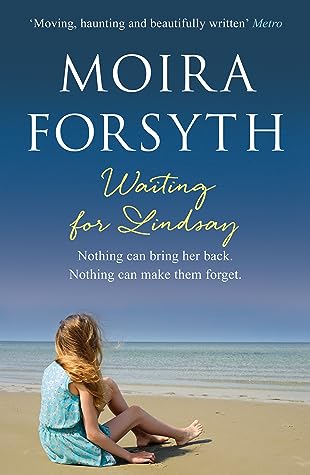 On a hot July day, Lindsay Mathieson, confident, carefree and
thirteen years old, walks up the beach where she has played all her life, around the rocks and out of sight. She does not come back.

More than thirty years later, her younger brothers and cousins are still dealing with the fallout from that terrible summer.

A destructive tragedy has shaped a whole generation of a family, siblings and cousins unable to truly separate from the past they try to ignore.

Though this is called ‘Waiting for Lindsay’ this book is not about her or the mystery of her disappearance. Instead, it is about the effect her disappearance had on her family, mainly her siblings and cousins who are left to deal with the consequences.

The focus is on the now adults, thirty years later, their lives and their issues. Despite time having passed, it’s as if the tragedy left a mark on each of them. Whether it’s because of how their parents adjusted to the tragedy, their own fears and insecurities, or even medical issues, everything just seems to be a struggle for these four and you feel for them all.

Everyone has their own way of dealing with things and these four are proof of that, the brothers are very different from each other as are the cousins, and I liked that they were so different yet all so close in their own ways.

The language is stark and no-frills but Forsyth still manages beautiful descriptions of Scotland and gives you a dark and intimate look at family and tragedy.

There was this sense of something being incomplete which is why I did not give it full four cups and instead gave it three and a half.

Thanks so much to Sandstone Press for a copy of this in exchange for my honest opinion.