New Year, new reviews! Though you’ll see this one is another one from the dreaded backlist lol.

Content/Trigger Warning: This book is a nonfiction memoir about one woman’s sexual assault/rape and focuses on her once friendship with her rapist. There are other accounts of sexual assault and rape are also mentioned, this is a very difficult read and I want to put the content warnings before the description of the book in case this book could be harmful to you. 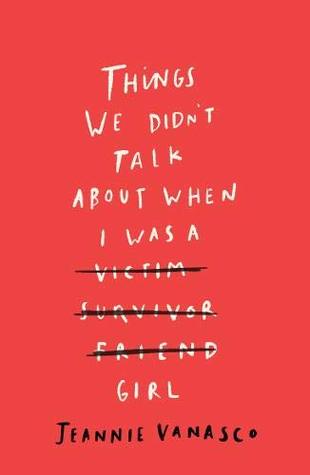 Jeannie Vanasco has had the same nightmare since she was a teenager. She startles awake, saying his name. It is always about him: one of her closest high school friends, a boy named Mark. A boy who raped her.

When her nightmares worsen, Jeannie decides—after fourteen years of silence—to reach out to Mark. He agrees to talk on the record and meet in person. “It’s the least I can do,” he says.

Jeannie details her friendship with Mark before and after the assault, asking the brave and urgent question: Is it possible for a good person to commit a terrible act? Jeannie interviews Mark, exploring how rape has impacted his life as well as her own. She examines the language surrounding sexual assault and pushes against its confines, contributing to and deepening the #MeToo discussion.

Exacting and courageous, Things We Didn’t Talk About When I Was a Girl is part memoir, part true crime record, and part testament to the strength of female friendships—a recounting and reckoning that will inspire us to ask harder questions and interrogate our biases. Jeannie Vanasco examines and dismantles long-held myths of victimhood, discovering grace and power in this genre-bending investigation into the trauma of sexual violence.

If you’ve read the warnings I put or the GoodReads summary you’ll see that this was a very powerful and heavy read. And yet despite the content, for me, I had a hard time putting it down. Here was a woman’s thoughts about her rapist, someone she knew, because, let’s face it, we’d love to say rapists of women are scary men that follow you home on dark scary nights.

Unfortunately, the truth is even scarier. Rapists are often people we know, people we trusted.

This happens to our author Jeannie Vanasco, when she’s at her most vulnerable, one of her closest friends takes advantage. Fourteen years later and it’s still haunting her, she’s still riddled by what he did because time keeps going but the trauma lingers.

She’s become a writer, a professor, and she has students writing essays about their rapes, and she decides it’s time to share what happened to her but Vanasco wants to go further, she wants to talk to her rapist.

Because he was once her friend, he was once someone she trusted and cared for and though he’s done horrible things, he’s not a boogieman, he’s a man. So Vanasco confronts all her own guilt and fears, all her own anxiety and trauma to talk to him, to get his side of the events.

Her bravery in doing this shows us that nothing he says can justify himself but he’s not the scary man in the dark alley. Which makes it all the more terrifying.

Vanasco’s guilt about being nice to him, about praising him is such a conflicted experience and as a woman, I felt this was so important to read about. We have been taught all our lives to apologize to smooth things over, and even after something so horrible has happened, these teachings stick in our psyche a lot of times.

This was a very powerful read and in a way it can be validating and cathartic if it is a read that you can dive into without self-harm. Thank you to Ducksworth publishing for giving me a copy of this astounding novel in exchange for my honest review. 5/5 Cups from me.

I’m so glad you liked the book and now I wanna pick it up hmm. There’s so much we don’t talk about as a society and people like Jeannie help us to talk about some of the things. *tips hat to her*