Magic has a price—if you’re willing to pay.

Born into a family of powerful witchdoctors, Arrah yearns for magic of her own. But each year she fails to call forth her ancestral powers, while her ambitious mother watches with growing disapproval.

There’s only one thing Arrah hasn’t tried, a deadly last resort: trading years of her own life for scraps of magic. Until the Kingdom’s children begin to disappear, and Arrah is desperate to find the culprit.

She uncovers something worse. The long-imprisoned Demon King is stirring. And if he rises, his hunger for souls will bring the world to its knees… unless Arrah pays the price for the magic to stop him.

Amazon UK | Amazon US
[Affiliated Links: You will not be charged, I will receive a bit of money if you use my link to purchase]

This is hands down one of the best YA fantasy books I have EVER read. Barron’s writing is superb, her worldbuilding engaging and the pacing was perfect. Honestly, there is little to no complaint out of me other than I wanted more haha [and let’s face it, that’s a pretty common complaint from me].

The magic system is out of this world, I mean, it’s not born or earned, it’s given and it’s not even necessarily a good thing depending on the situation. Though in Arrah’s case, it’s something she wants and yearns for. Still, it’s such a great change of pace to the things we’ve gotten used to seeing in magic systems.

Arrah is such a wonderful protagonist and the side characters are so easy to love [or hate depending on which side of the plot they’re on] and I think I could never get enough of the relationship between Arrah and her Father. So often we find not enough positive parental relationships in YA but Barron gives you the good and the bad and Arrah’s father and grandmother are two of my ultimate favorite characters in this book.

I really want to focus on Arrah and her Father though. There is not enough YA with healthy parental relationships, like not even anything outstanding, just HEALTHY. So the fact that Barron used this as an opportunity to show both sides of parental relationships the amazing on both ends of the spectrum, speaks VOLUMES. Arrah and her Father are close, there is a deep sense of trust and love and the affection is so blatant from her father that it made me teary-eyed several times. His love is what I hope Fathers show their children more often than not and it’s a great balance to strike against the relationship Arrah has with her Mother. [Who still loves her in her very misguided way]

There is so much love in this book, between friends, including Rudjek, between Arrah and her father, and her grandmother, and it makes all the difference when you read this story.

Arrah’s strength is in her love for those close to her, and she comes to realize that it’s a strength, that even if she hadn’t been gifted magic like those around her, she still has something to fight for and the spirit to do so. Not to mention there are some great twists and crazy obstacles that she faces.

If you want lore that’s drenched in the wonders of different African-inspired tribes and cultures with a kickass magic system, heartache, love, and perseverance, well, I present Kingdom of Souls.

** I preordered this in February, and I even was lucky enough to get the Goldsboro edition, but for this review, I used the eARC that HarperVoyager UK gifted me, via NetGalley **

[I could sincerely gush about this all day and feel so lucky to have had a chance to read an eARC of it….But…if you have a physical ARC and wanna talk trades or something, hit me up, please, that is high on my wishlist lol.] 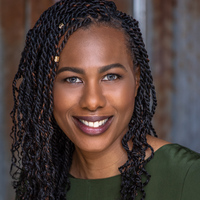 Rena Barron grew up in small-town Alabama where stories of magic and adventure sparked her imagination. After penning her first awful poem in middle school, she graduated to writing short stories and novels by high school. Rena loves all things science fiction, ghosts, and superheroes. She’s a self-proclaimed space nerd. When she’s not writing, she can be found reading or brushing up on her French.

^^ This site is AMAZING and has so many cool extras ^^

Brilliant review, I have been looking at this one! I think it sounds amazing.

Thanks for commenting, and it really was a great read for me, if you get a chance to read it, I hope you like it!

This book sounds amazing! It’s definitely going on my TBR for sure now. I’m really glad there is a healthy father – daughter relationship in this book because we really do lack these in YA. Great review ❤️

goodness i am so excited to start my copy, thank you for sharing your thoughts! 🙂

Lovely review!! I’m so happy to see that this one was a huge hit for you! ❤ It's awesome that the author shows two sides of parental relationships – healthy and not-so-healthy ones. I think that truly goes to show how varied these types of bonds can be!

Whoa! I have been seeing this book all over bookish twitter and bookstagram lately… and it has so much hype which makes me nervous. But this is the first review I have actually read and heard for it, and you make it sound so deserving. One of the best fantasy books you’ve ever read is definitely some high praise 😀

FINALLY! Someone who has written a good parent-child relationship representation. Is it just me or does that rarely ever happen nowadays? Parents are amazing but absent, or present but terrible. 😦 I’m so glad you’ve found a book that has good rep. ❤️❤️❤️ This book sounds utterly tempting. Loved your review!

I know it drives me crazy! And I’ll be screeching about this book more next month and this month lol

[…] Another book that’s a fave for this year and one I’ve been seriously raving about. GO FORTH AND READ THIS AMAZING BOOK. It’s another darker YA fantasy, and Barron is like out to break hearts and take names. You’re left wanting to reread this the moment you put it down, especially since we’re going to have to wait on book two. My review for this is here. […]

[…] Haley yelled at me to buy this one and after almost a year I’ve succumbed. […]