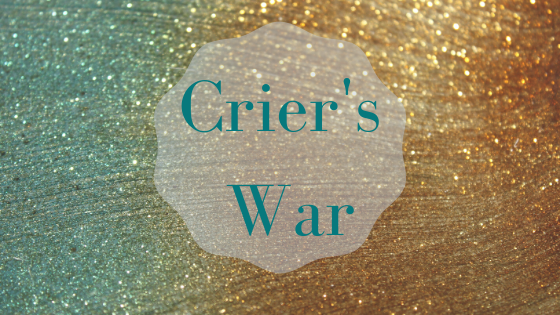 Firstly, let’s just take a moment to drool over the cover.

Okay, now that that is out of the way, let’s get onto my review!

I loved Varela’s writing style, holy cow her style is SO fluid and gorgeous, it’s the exact sort of prose I could read for the rest of my days happily.

It’s also a beautiful story that Varela is telling, forbidden love, and not because it’s between two girls, but because one was made and one is mortal.

So, lovely prose, great forbidden love plot and oh, did I mention political intrigue and the hint of rebellion?

Those called the automae rose up to rule their creators, the humans, but, now their oppression is one that is too much for the mortals.

Caught up in this is Crier, though she’s an automae she seems to have more ‘heart’ than her father or her fiance. She soon develops a soft spot for a human servant, Ayla, and cue the forbidden love!

I wanted to adore them, and though I did love both characters, but, their love story hasn’t convinced me…yet.

The pacing of the book on a whole was…’ wonky ‘ mostly because we’re focusing on the girls, on the first half, which is good, but, we’re focusing on them separately and everything else going on in the background seems to catch you off guard because it just bursts forth.

That then brings me to their love story. Because we’re focusing on them separately for the most part, and we see how much Ayla despises the automae, though I can believe Crier has a deep affection for her, I don’t believe Ayla does. And though Crier has affection, there’s so little time that’s passed that I struggle to believe that she is in love.

So, while I love them, I’m still waiting to feel like they care for each other past friendship, and then we’ll work up to love.

Though the pacing was a struggle for me to look past, I am sincerely in love with Varela’s writing style, the plot between automae and humans, and the characters.

There is a lot to love in this story and I honestly cannot wait to read the second book. I do believe that things will probably even out in pacing in the second book. And hey, I’m a huge fan of f/f stories anyway, so, there was no way I wasn’t going to adore this on some level, haha.

I buddy read this with Isabelle from Nine Tale Vixen, and expect a few more reviews from our buddy reads this month! [Also she does a way better job with explaining things in her reviews in general lol]

Overall, four cups of coffee from me! Bring on book 2!!! This also gets to go on my StartonYourShelfathon list because I preordered this gorgeous baby, but finally, I’ve gotten around to it! The sequel, Iron Heart, is out in September!

Nina Varela was born in New Orleans and raised in Durham, North Carolina, where she spent most of her childhood running barefoot through the woods. These days, Nina lives in Los Angeles with her writing partner and their tiny, ill-behaved dog. She tends to write stories about hard-won love and young people toppling the monarchy. On a related note, she’s queer. On a less related note, she has strong feelings about hushpuppies and loves a good jambalaya. CRIER’S WAR is her first novel.

You can find Nina at any given coffee shop in the greater Los Angeles area, or at www.ninavarela.com.