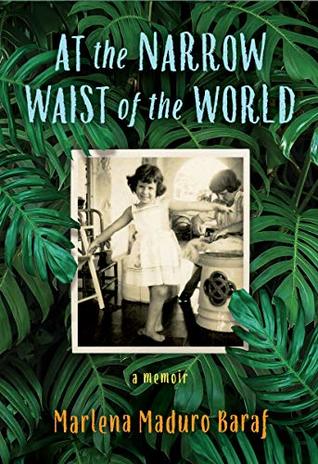 Raised by a lively family of Spanish Jews in tropical and Catholic Panama of the l950s and 1960s, Marlena depends on her many tíos and tías for refuge from the difficulties of life, including the frequent absences of her troubled mother. As a teenager, she pulls away from this centered world—crossing borders—and begins a life in the United States very different from the one she has known.

This lyrical coming-of-age memoir explores the intense and profound relationship between mothers and daughters and highlights the importance of community and the beauty of a large Latin American family. At the Narrow Waist of the Worldexamines the author’s gradual integration into a new culture, even as she understands that her home is still—and always will be—rooted in another place.

Today I’m reviewing a memoir that was a really powerful read for me.

It was written with such fluidity that I forgot that this wasn’t just a beautiful novel of fiction. Marlena takes you straight into the heart of her culture, of Panama, and most importantly, her family. There are some similarities over various Hispanic cultures and so I really connected with Baraf’s story, things were so easy to understand on more than just a reading intake level.

Marlena has provided translations where they fit best and in some cases, as many who speak more than language know, some things just get lost in translation and those phrases are left untouched but easy enough to figure out the gist within the context for those who don’t speak Spanish.

There really is a poetical feel to it and you get lost in the words and pages. Marlena is unabashedly and unashamedly honest about her feelings, her experiences, and the bonds with her family. The family history completely intrigued me and I thought this book was simply beautiful.

It’s not often I have read books that I connect with on a cultural level, though admittedly there are vast differences between my heritage and Marlena’s, there are somethings which connect and overlap between the cultures and having a memoir reflecting that at all was quite important to me. I didn’t know how much it meant to me until I was reading it.

This memoir though isn’t just for those with similar cultural backgrounds, it’s also a great read to understand someone coming to terms with their own memories and family history, nothing world shocking, but instead, so common and relevant that most can connect to her through her familial interactions, especially the bonds between siblings and parents. Also, it takes a look at grief and that it does linger, and Marlena does a great job with writing it with such a lyrical ease.

A more in-depth review plus interview will appear on my blog at a later date, and this review will go up on Amazon upon Publication.

A heartfelt and poetical memoir ❤️

You’ll be able to buy this wonderful memoir come August [6]!!

It was a surprise to me. I’d taken a first creative writing course late in my life, and from an early assignment I uncovered a memory from my childhood. After that I couldn’t stop. It was not a decision. It happened. I do think writing the memoir originates from a nostalgia for the place of my birth,

There are several books written about the historic community I come from. I had pretty much read them all, and also several books about the history of Iberian Jews who were expelled from Spain and Portugal during the Spanish Inquisition in the late 1400/1500s. So I had a general sense, but I still had to check my facts, because you can make mistakes when you try summarizing things. I also interviewed elders in the family for some very specific details of more recent times–but still before my time.

This is a perfect question. And I am not sure I can answer it fully yet. My sister and brothers were very supportive when I started writing this. We went through a lot together so I think we are closer than other siblings. Four of the “chapters” were published in literary journals and some in the family read those. One of my children has read parts. The other not. However, I have a huge extended family that lived these stories and knew the same people. I’ve yet to see how they will react. I will be in Panama for a book fair very soon and will find out. My mother’s best friend is still living and I adore her and I don’t want to hurt her. Her feelings are probably that you don’t say certain family things in public. I pray she will understand.

I would say writing, rewriting, and editing took about 5 years (and if you’ve read the book you know that I don’t use a lot of words). My process was taking out words that were not essential. Other writers tell me that I lean towards poetry. I wanted the reader to fill in the gaps with her own connections. (This was not a conscious thought.)  By the way when I got up in the morning and went directly to the empty page. If I got distracted with a little chore or two, I lost the day. I still struggle with this. The trick is not to look at your phone before you start, if you can possibly do this.

I have this vague notion that I’d like to try fiction to see what I could invent, also to study poetry seriously, and I am definitely continuing with interviews with Hispanics all over this country, something that I started several years ago.

Thank you so much for saying this. I don’t think I would change anything.

I would like to say thank you all for giving me the opportunity to read this.

I am so happy that this resonated deeply with you. I think a reader who is keyed in to the words and images and understands and connects is the greatest gift a writer could receive.

Soy panameña y americana. Can you split the two? Born and raised in Panama, I chose to leave my tiny land for Los Estados Unidos de America—a newly minted immigrant. I was in my late teens. In my thirties, I swore allegiance to the country I’d adopted and became an American. I raised a family and worked as book editor at Harper & Row Publishers and McGraw-Hill Book Company after which I studied at Parson’s School of Design and established my own design studio. In the last ten years I’ve dedicated myself to the compelling art and craft of writing. I’m a devoted alumna of the Sarah Lawrence Writing Institute.

Two loving sons have given me two amazing women as daughters-in-law. I am married to a funny, Brooklyn-born man. Life is strong. I endure the Mets. I love orchids and cats.

At the Narrow Waist of the World: a memoir is a mother-daughter story about mental illness and healing. Is mental illness fixed, or does it move in and out of focus? Mine is a story about forgiveness and acceptance. About leaving home and looking back and finding it again.

The information and photo have been taken from Marlena’s website which can be found:

Publisher information can be found:

4 replies on “At the Narrow Waist of the World: A Memoir -Review & Author Q&A-”

It is nice reading an alternative way of putting the interview with the review rather than the way I usually do it. I always fear itll run too long but the way you do it really flower beautifully.

pffft…. even if that is true… it paid off and taught me something.. because I’m gonna have to do that next month and was trying to figure out how.

[…] Also, my first Author interview can be found here: At the Narrow Waist of the World: A Memoir -Review & Author Q&A- […]