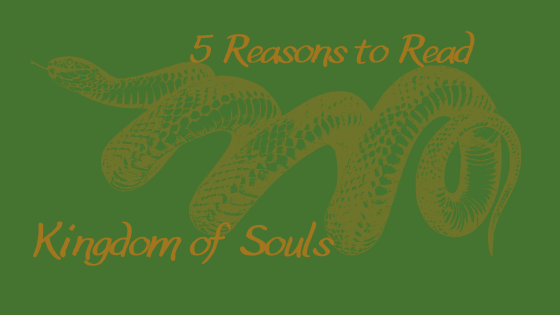 I am so sure that it’s not secret on how much I love Rena Barron’s Kingdom of Souls and so I figure why not give you all more reasons to want to read it besides the fact I have impeccable taste. (Please feel free to laugh, I know I’m laugh-crying as I type that but this book is certainly one of the best books I’ve ever read.)

Don’t forget that the sequel to this Reaper of Souls is out on the 16th! (Of February, 2021 for those who are reading this post like two years later)

Barron gives us a world with this complexity in it that I freakin wish the real world had. The cultures and diversity especially within the five tribes are so impressive that it makes me weep at the beauty of it all. Not to mention the freakin history and vastness of this world that Barron has made. (Click here to be taken to the Kingdom of Souls map)

The magic system is just to die for. I mean, no joke, witch-doctors, tribes with magic a temple to represent those in the city with magic in some ways and also to act balance out the Kingdom’s powers. ALSO there is anti-magic, and there are people like Arrah who have no magic, but, in her case being the daughter of TWO witch-doctors, that in itself is completely mystifying and such an important point to her and her family.

He is the cherry on top of this book, I will die on this hill, his humor and his personality wins all. I know, I played favorites. Of course Arrah is my ultimate favorite, so we’ll get to her, but as far as secondary characters/supporting characters go, Sukar is my man. ALSO that brings me to my next point.

I CANNOT EVEN BEGIN on where to start with this. THIS ESPECIALLY includes Arrah’s family. She has a very unique relationship with each family member and friend int his book but my absolute favorite relationship is between her and her father. To see a healthy and supportive father-daughter role is SO important to me in books. I think because it’s the one that does tend to get slighted in books if we were looking at percentages/numbers. But Arrah and her Dad will give you all the feels. (Click here to be taken to the cast of characters)

Hands down Arrah is the most amazing part of this book, her personality, her story, her trials and sacrifices…it’s all this type of perfection that has made me a huge fangirl. I will fight anyone who says they don’t like her or at least respect her as being a spectacularly written character. (Actually, I won’t, like, I’m not good in confrontation, so please don’t hurt me)

She’s so complex and she’s so focused on what she needs to do without forgetting the fact that she’s human and has other feelings too. This is represented a lot in her interactions with others, and the fact that she’s woven into The Kingdom itself in a way that makes it hard to imagine that world without her. She’s real to me, her pain is mine when I read and that’s always a huge indicator of how important a book is to me. I can’t be detached when reading about Arrah.

4 thoughts on “5 Reasons to Read Kingdom of Souls”