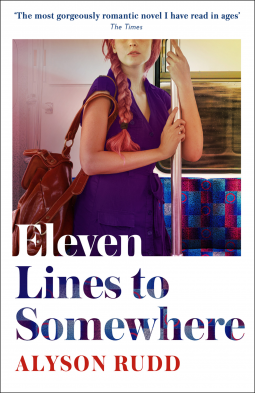 Everyone is searching for love. Sometimes we just take our own route to find it.

When Ryan spots a young woman on the tube on his commute, he can’t take his eyes off her. Instantly attracted and intrigued, he’s keen to find out more about his mysterious fellow passenger.

Sylvie spends all day travelling the underground, unable to leave for reasons unbeknownst to Ryan. But Ryan hasn’t dated for nearly ten years, when he was at university and the love of his life tragically died.

For some inexplicable reason, he just can’t shake the feeling he wants to help Sylvie. In a world of missed opportunities and what-ifs, a connection has been made.

This was an intriguing novel, not my normal pick so it was really nice to get out of my comfort zone. The premise is Ryan is a man in his early thirties, having taken a backseat from love since Uni when the love of his life suddenly died in a car crash, still, he finds himself drawn to a mysterious woman on the tube.

What ensues is a story of love and discovery, not just for Ryan and his mystery girl but for those around him; his roommate, best friend, mother, sister, all of them trying to find their places and dealing with different sorts of love.

Ryan wants to unravel the mystery of this girl who has captured his attention, and maybe, just maybe she needs help finding answers and holds some for him too.

The aspect of the trains was unique though I had read something similar in a book called ‘The Seventh Train’ [I’d say more but that book isn’t the focus today!] so the fact that I can recall only one other book similar to it, is a point in its favour! Gotta love having a unique twist to a romance, and not to mention this book encompasses the love of family, self, and others as well, not just romantically.

It was a good read, but, I did feel it was disjointed, it felt as if it didn’t fit together at times and jumped too abruptly. I did like the message it had at the heart of it all though. I also didn’t really like how shallow Ryan seemed to be in the end, I think Sylvie was the one to love in this book and Paul. Others like Naomi, Hana, and Ed, were really just hard to like but maybe that was a good thing, to read about characters that aren’t always as likeable.

Thank you so much to HQDigital and NetGalley for an eARC of this in exchange for my honest opinion as part of the blog tour.

One reply on “Eleven Lines to Somewhere – Blog Tour”

I have just seen another review of this as well – I didn’t know it was out! I LOVED her first book.