I love when books just give you the classic ingredients of a fantasy. This had all the elements I love, a ‘squad,’ magic, mystical creatures, grand adventures, oh, and even pirates!

Volke has been secretly training his whole life to be an Arcanist, this includes learning and memorizing 110 of the readable steps with their little nuggets of wisdom. So what if he’s a gravedigger’s apprentice and considered not ‘good enough’ to participate in the ceremony of worth,  or that there are only two phoenixes to bond with.

He has dreams and no one will stop him.

Volke’s perseverance was really fun to read, and Stovall gives him a vibrant narrative voice. In fact, I appreciated the light-hearted flow of Stovall’s writing style in general and we’re given a pretty fun cast of characters to help the story on its way.

Volk has a foster sister of sorts, Illia, and they travel to the mainland from their island with two more of their fellow islanders; Atty and Zaxis.

Once on the mainland, they’ll have to find a guild, have a master train them, and hopefully one day become masters themselves.

Illia and Volke have unusual/rare Eldrin [the name of mystical creatures bonded to arcanists] and in Volke’s case, having a knightmare could mean double the work as the knightmare has been bonded before.

I don’t want to give too much away but this is such a fun read. The pacing is fast and there’s one adventure after another. It was a bit too easy for the characters in a way at times which is why I rounded up to 4 on GR but it’s a 3.5. The antagonist of the story was no mystery and yet I enjoyed having them revealed and the big showdown at the end. My favorite parts tended to be the ones with all the apprentices interacting with each other! They’re so cute and funny!

I will definitely be looking into the rest of the series and plan on keeping my eye on everything Stovall writes from now on. This could be a great read for older MG and younger YA readers as well. Thank you to WriteReads Tour and Stovall for an eARC in exchange for my honest review. 3.5 cups of coffee from me! 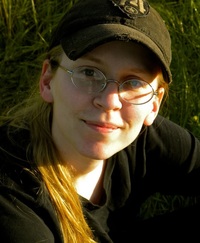 Shami Stovall is a multi-award-winning author of fantasy and science fiction, with several best-selling novels under her belt. Before that, she taught history and criminal law at the college level, and loved every second. When she’s not reading fascinating articles and books about ancient China or the Byzantine Empire, Stovall can be found playing way too many video games, especially RPGs and tactics simulators.