Tankar Holroy, Lieutenant in the Stellar Guard of earth’s Empire, floats in space after his spaceship is sabotaged. Rescued by an enormous, unknown ship, he awakes to discover himself saved by the People of the Stars who are born and live in space with minimal contact with planets and their occupants whom they call, with contempt, planetaries.

The chilly welcome he receives from the ship’s leader, the Teknor, is followed by overt hostility from the other inhabitants of the Tilsin. Only a woman named Orena reaches out to him.

Tankar soon realizes that he was rescued for his knowledge of tracers, the technology that allows Empire ships to track others through hyperspace, a technology the People of the Stars lack. Out of spite, he refuses to deliver the one piece of knowledge that can protect the people who saved but now spurn him – and the consequences will be catastrophic.

FLAME TREE PRESS is the new fiction imprint of Flame Tree Publishing. Launched in 2018 the list brings together brilliant new authors and the more established; the award winners, and exciting, original voices.

Did you ever get a kick out of the old paperback sci-fi covers? The ones that were ludicrous but also you couldn’t help to be curious?

Maybe it was just me, I don’t know, but hearing this was Golden Age Scifi and that it had never been translated into English before, well, I had to sign up and see what this book was about. 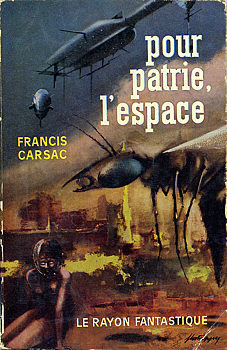 Not too crazy, but, you get what I’m saying about it being one of THOSE books right?

And I enjoyed it!

I won’t lie, this is not a masterpiece of writing, but, it was enjoyable and the world that Carsac builds is incredible, the technology was so effortlessly put in, and I loved the Empire and Star People, the nonhumans, everything was crafted with such detail.

I love seeing where we started with Sci-fi and how far we’ve come, so reading this was really a sort of study into the history of sci-fi in a way and for that and the worldbuilding alone, I would round it up to three stars.

Why didn’t it get higher? Well, Tankar was not enjoyable compared to the rest of the book’s aspects that I thoroughly liked. He was young, haughty and his stubborn pride was hard to read, but, it was also in line with his personality that Carsac gave him.

Being a 1960s space opera also meant this was the golden age of women throwing themselves at men, I’ll admit, the women were all very capable in Carsac’s book, but the fawning over the man is definitely probably going to be unbearable for a lot of people. I found it pretty amusing, and I remembered the era this was written in, so, I think it may not have bothered me as much.

The writing style was not as fluid as I would have liked but I have no idea if that’s the translation or Carsac, so I’ve kind of left off on commenting on that very much.

But let’s get back to the positives!

Carsac has made the future a believable one, the earth is now an Empire, it has control over other planets, humans have stretched their reach, but, the Empire is not a kind regime. And it is a regime. The Emperor is not respected, the people are treated like cattle, and eventually, the Empire is on the brink of rebellion.

Tankar is taken from this world, from everything he’s ever known and dropped into a society of nomadic humans that live and travel among the stars in their city-state ships. They are even nomadic within their world of ships, and they also extremely prejudice to those who are from planets. Tankar, rescued by them, is seen as something beneath them in many ways, their hatred for ‘planetaries’ especially those from the Empire is never hidden.

I loved the difference between the planetaries and the people among the stars. The Empire is a world where science is considered almost treacherous in itself, there’s not a strong dedication to creativity that is thriving on the city-state ships, and even teachers are seen as those to be wary of.

When you consider our political climate in these strange times, well, Carsac may have gotten it closer than we would have thought! And because of this, more than anything else, I was pleased with the novel.

It’s worth a read for any sci-fi classics fan or those who enjoy the golden age space operas.

Thank you to Anne Cater of Random Things Tours and Flame Tree Press for an ARC in exchange for my honest opinion as part of the blog tour.

Francis Carsac, a pseudonym for the world-renowned French scientist, geologist, and archaeologist Francois Bordes, wrote and published six novels during the golden age of science fiction.

Never before published in English, these novels resonate with timely issues ranging from climate control to racism and greed and tell the stories of characters whose challenges and triumphs clearly relate to many of the problems we encounter today. He has been translated and published into Russian, Romanian, Bulgarian, Lithuanian, Latvian, Hungarian, Estonian amongst others.

One reply on “The City Among the Stars – Blog Tour”

Thanks so much for the blog tour support xx