Six months after Noam Álvaro helped overthrow the despotic government of Carolinia, the Atlantians have gained citizenship, and Lehrer is chancellor. But despite Lehrer’s image as a progressive humanitarian leader, Noam has finally remembered the truth that Lehrer forced him to forget—that Lehrer is responsible for the deadly magic infection that ravaged Carolinia.

Now that Noam remembers the full extent of Lehrer’s crimes, he’s determined to use his influence with Lehrer to bring him down for good. If Lehrer realizes Noam has evaded his control—and that Noam is plotting against him—Noam’s dead. So he must keep playing the role of Lehrer’s protégé until he can steal enough vaccine to stop the virus.

Meanwhile Dara Shirazi returns to Carolinia, his magic stripped by the same vaccine that saved his life. But Dara’s attempts to ally himself with Noam prove that their methods for defeating Lehrer are violently misaligned. Dara fears Noam has only gotten himself more deeply entangled in Lehrer’s web. Sooner or later, playing double agent might cost Noam his life.

Content/Trigger Warning From the Author: However…this book is a lot darker than TFK. The Electric Heir is an exploration of the narratives we tell ourselves in order to survive abuse while it’s happening, and the slow journey of being able to define and face our trauma after it’s over.

One thing I want to make clear is that some characters in this book will initially express ideas and narratives about abuse that are harmful and false, such as denying that abuse is occuring or denying that certain acts constitute abuse. Many abuse victims, including myself, once believed similar narratives–it was the only way we were able to survive the abuse while it was going on.

However, these narratives are ultimately challenged. That’s part of the characters’ journeys in this book. So I just wanna be clear that even if a character expresses a certain belief or beliefs at a given point, that is not an endorsement on my part. I also wanna be clear that there is a lot of denial going on in this book, especially in the first half–and although the denial doesn’t last, if this is something that will be difficult for you to read, you should know this up front.

I wrote this book based off my own lived experiences as a survivor, which are not universal, and which are not always clean. To survive is to fight for your life, for your self-concept, for the right to your own agency and autonomy. That’s messy business. This book reflects that messiness.

This was darker and a much more emotional read than The Fever King, and though it was a rollercoaster on my feelings, it was worth reading every single page. [Though this may not be the case for everyone, so please, look above and the content and trigger warnings provided by the author to ensure this book will not be harmful to your mental health]

Noam has lost some of his innocent shine, but, he’s still an idealist and ideologist at heart and we see his struggle to keep his values as he does what he feels needs to be done in regards to Lehrer.

This is such a dark time, Noam is in a denial of sorts, unable to see what position he has truly put himself in, or unable to admit it, and this was so heartbreaking. Honestly, I felt my heartbreaking for him every ten pages or so, I didn’t agree with some choices he made, but, the things he did and why he did them really pull on your feelings.

Noam is having to do more of what he had been persuaded to do by Lehrer and he thinks that he needs this to happen so that he can do his part for bringing down the man, but he’s also trapped by his conflicted feelings for a man who seems to care about him but that he knows ultimately hurt the people he cares about.

Dara, who has suffered so much continues to be an amazing survivor who perseveres through everything handed to him, and now Noam and he, unfortunately, have much more in common.

This was another hard thing to read, Dara is seeing Noam in a position he was in not long ago himself, and he wants to protect Noam but also he is so frustrated because he is unable to, that you end up also having your heartbreak about ever ten pages or so for him as well.

The relationship between the boys is rocky, to put it mildly, they are both in dark and difficult positions and they have both been through so much, that doesn’t keep you from cheering them on though, just wanting things to work out for them.

We don’t really deal much with the other level IVs and it’s one of the reasons I gave this 4.5 instead of a full 5 on my rating. It felt like a lot of loose ends, if this was truly a school then when 3/4 pupils are missing, you think there would be more to it than just leaving the fourth one on his own. Still, I do love the other level IV students and I was happy to see them be more present from the 2/3 to the end, and oh that ending, man, that was PERFECTION. LEE BROUGHT ME TO TEARS. [Not a lot because I am a ginger without a soul, but enough!]

At the heart of this, is a story of survivors and the cost that children pay for the choices adults make while struggling to grow up and make a world they want.

I loved this book, even more so than The Fever King.

Thanks to NetGalley and the Publisher and TFFBC for an eARC in exchange for my honest review. 4.5/5 Cups of coffee from me!

Victoria Lee grew up in Durham, North Carolina, where she spent twelve ascetic years as a vegetarian before discovering spicy chicken wings are, in fact, a delicacy. She’s been a state finalist competitive pianist, a hitchhiker, a pizza connoisseur, an EMT, an expat in China and Sweden, and a science doctoral student. She’s also a bit of a snob about fancy whisky.

Victoria writes early in the morning, then spends the rest of the day trying to impress her border collie puppy and make her experiments work.

She is represented by Holly Root and Taylor Haggerty at Root Literary. 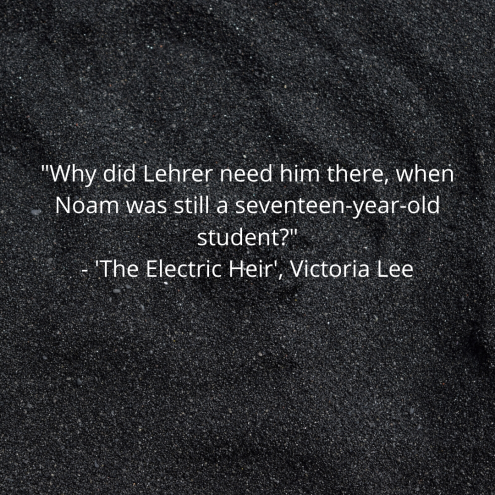 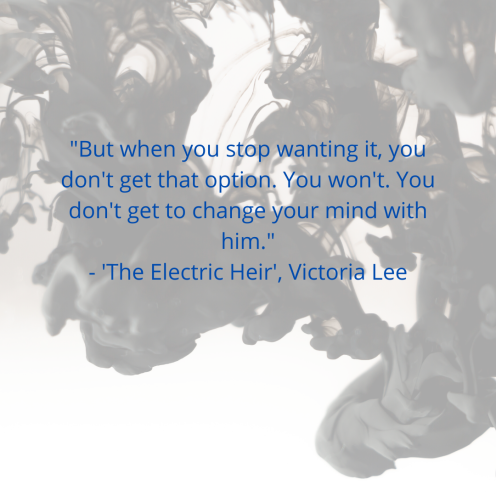 Prize: Win (1) copy of THE ELECTRIC HEIR by Victoria Lee (U.S. Only)