Hey guys, so here I am to talk about my second day of attendance to Edinburgh Book Festival.

Yesterday I got to hear AL Kennedy speak, the author of The Little Snake. Which I reviewed here.

It’s a call/response to The Little Prince and an amazing read that packs so much power in so few pages.

I’m also partially in love with AL Kennedy now haha, I mean, talk about WHAT a speaker!

Kennedy starts off with the readings and picked some great ones as they were some of my favorite scenes, and the quality of the readings really hit home of the impact and message of her novel. This is about a snake who is the personification of death, it’s about a little girl, and it’s about what they can learn from each other as well as what we can learn from them and their friendship.

And, I mean, it’s a snake that’s a harbinger of death and gets to end a politician’s life, so I mean, that was just an extra awesome moment lol.

Kennedy speaks of how Lanmo our dear snakey snake has some days off now as people are efficient at killing each other at this point in time [in the story and well to be fair in my opinion in real life as well].

This is more than talking about The Little Snake though and I loved where Kennedy was coming from with the discussion in general.

Kennedy also goes into depth about how today there are people/companies out there whose sole objective is to keep humans from being kind to one another but that, in the end, they will always fail and man do I think that is SUCH an important message to promote because there are times we can lose sight of that, that hopefully more often than not when someone is in need, others provide.

Of course in a more digital age, it can be way too easy to ignore what others might need or to lend a helping hand, and yet we still manage to have gofundme and petitions, so, Kennedy provides this glimmer of hope that I think we all need right now;

The Proper purpose of being human is to help.”

Also, a good point is brought up, the sliding scale of annoyance is drastically cut down now, it’s more like ‘I’m annoyed, I wish you were dead’ instead of like ‘Eh, I’m annoyed, but I don’t want you dead.’

And, well, I was SUPER awkward, yet again, I can’t help it, there’s something about authors that bring out the most awkward of turtles in me, BUT I was happy because this was the first time I got the courage to ask a question during the question time of the panel.

I asked Kennedy why she chose the snake versus other aspects of The Little Prince to adapt, and well, it’s a love of reptiles and feeling that maybe there was more of a connection to the animals than people when reading the story. Kennedy also bears a hatred to the rose that I really could identify with, inner child me and me now both detested the rose, and I think that the imagery Kennedy provided with the rose being eaten by a million sheep and then found in the remanents of their waste is pretty much the best ending for the rose.

Then I got to talk to some great people in the queue and Kennedy signed my copy that Canongate Books gifted me, and it was like such an awesome end to my first week at the book festival and I can’t wait for my last event on Tuesday which is with Samantha Shannon and Holly Black.

Okay, this turned more into a gushing fan rant and discussion of the panel rather than a little summary but I have no regrets.

And I mean….Look how close I was! [This picture is before the panel started as they don’t allow photos during, whoops, didn’t know that until then!] 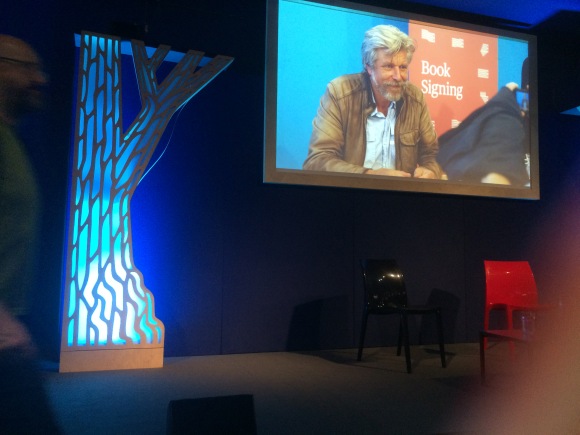 Oooh AND AND Here are some pictures of my signed books if you all want a glance!

Ooooo I’m really curious now about the book. I’m happy you had a great experience for day 2 and hopefully day 3 will be just as good. Yay for having courage to ask a question! I can’t wait to hear about the next day of the festival! And that is such a cool notebook!!

I really need to find more book related events to go to! I love the Little Prince. We had to read it in french in high school.

Looks like you had an awesome day ! Don’t worry, me too I get this awkward/shyness when I converse with an author (though in my case it’s only electronically) — they’re just super intimidating for me !! What if they take my words the wrong way ! eeek!
but it makes me doubly happy when they comment on one of my tweets about getting better and stuff, just extra sweet :3

Kennedy sounds super awesome. The snake as the harbinger of death to kill a politician? Can America borrow a super big one addressed to the White House? 🤦‍♀️

Woo, all this sounds like a lot of fun! I am glad you are enjoying the book fest.
I haven’t met any authors, so can’t say about the awkward mess but I am sure I will be flailing around, dying inside if I ever do get the opportunity to meet one!
Also, wow, so many signed copies! I have to say, I am SO jealous of you right now.

the part about humans killing each other, and trying to keeping humans from being kind to one another, along with all the talk about a snake, honestly gives me a ton of Crowley feels because Good Omens has absolutely taken over my heart 😅

but The Little Prince is one of my favorite books, and this sounds like a fantastic read! I totally relate to being an awkward turtle around authors, I love going to see/hear them speak but it’s doubtful whether I’ll ever be able to actually interact with them. yay you for asking a question during the panel!