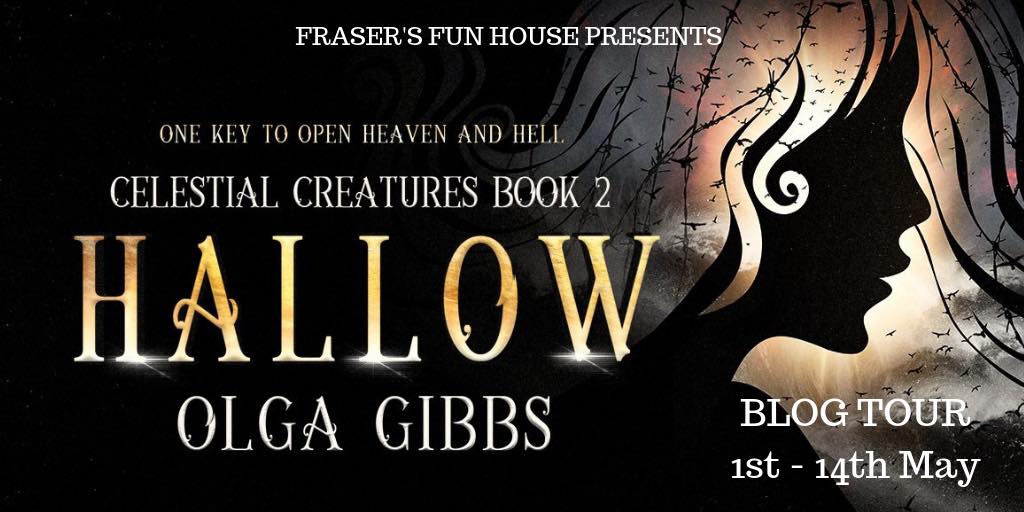 Being one of the most formidable archangels with the power to end the world doesn’t serve you well if you don’t know how to use it.

Thrown into a battle of courts and factions, tangled in a web of intrigues and palatial games, naïve Ariel is surrounded by powerful angels, chasing their own agendas.

There’s no one she can trust. Everyone stands to gain something from her death.

To avoid the bloody battle that Baza brought to her door at Uras, Ariel retreats back to Apkallu (Earth) to find her sister, but the Heavenly battles and intrigues she flees follow her, as Baza’s immense hold on Apkallu forces Ariel and Rafe to make uncomfortable choices.

Ariel’s fight for survival is far from over and it looks like it’s going to be a deadly one.

Hallow is book 2 in the Celestial Creatures quartet. Ariel is a teen burdened with being part of a world that until recently she knew nothing about. While grappling with her humanity, she’s having to deal with Archangels and a battle that could shake the world. When faced with her options, Ariel goes back to earth, wanting know part of a battle for a world she barely knows but the one thing that she wanted to protect on earth seems to be continually just out of her reach.

I’ll be including my review for Heavenward at the end too so you can glance at it if you want. The first book was great, a fun read, and one that I read in one sitting because I just wanted to keep turning the page to find out what happened next! Now this same energy was in Hallow and I also read this one in one setting. Although Heavenward was a fun read I just want to say that the growth between it and Hallow is impressive to say the least. Gibbs gives us such a beautiful prose in Hallow and we get to really enjoy Ariel as we already know her backstory. While Hallow has a returning cast, we also are starting to get a real sense of just what poor Ariel has been thrown into.

Even with an Angel protector, Rafe, Ariel is still struggling and it’s more than just accepting what she is, it’s accepting who she is and that’s something she has to try and handle all on her own, not even Rafe can help her in that.

Fleeing to Earth cannot save Ariel or those she cares for and she’s faced with a lot of hard choices, and that’s not to say she hasn’t been through the runner already! The message is clear though, Ariel cannot runaway and we’re left wondering with what her next move will be.

Just as in Heavenward, Gibbs is making us wait until the next book and has me waiting on pins and needles. There are some nice twists and unexpected turns, and I love that Ariel is such a believable teenager. People can forget as they grow older that being a teen is not easy and more than that some teens have problems that others will never even have to deal with as adults.

I have no regrets in saying that Sam is a favorite character of mine in the series, and to point out that this really is a darker fantasy for YA.

Olga Gibbs lives in a leafy-green town, nestled amongst the green fields of West Sussex, England. She was writing from the age of fifteen, mainly short stories and novellas and was a guest columnist for a local newspaper. When she is not dreaming up new adventures for her imaginary friends, she does outreach work with teenagers.

She is currently writing a second book in the “Celestial creatures” series and another stand-alone psychological crime thriller book.